Biblical Archaeology: Ark of the Covenant

Where now is the Ark of the Covenant?

Dr. Fleming: This is a very curious question that so many people have. It is interesting. We do know from the Bible in 2 Kings 25 that Nebuchadnezzar burned the house of the Lord, the king’s house, and every great man’s house he burned with fire. That is our last specific mention of the Ark. As you might have guessed, some people wondered if the Babylonians then destroy it.

What is clear is that Ezra returned and rebuilt the Temple in the early 500’s BC. Later, Nehemiah rebuilt the walls and things in the 400’s, and then later Herod the Great rebuilt it.

No Jewish source speaks of the Ark, and in fact the opposite. When the Temple in the time of Jesus was described in Jewish memory, it reported the Holy of Holies was an empty room. There was a stone that stood three fingers high above the rest of the floor where the ancient Ark of the Covenant used to be, but behind the veil or the curtain there was an empty room.

Jews were wise enough as they probably learned from the prophets to know that God does not dwell in a box. The Lord could still be in their worship and their hearts. I’d rather have mercy then sacrifice as the Lord said.

So, no, there is no mention of the Ark of the Covenant. When the Roman’s destroyed the Temple in 70 AD, what did they show back in Rome on the victory march? It is the Temple lamp stand, the trumpets, the menorah, and things like that, but no Ark. 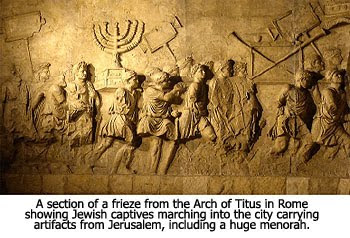 Dr. Reagan: I have read a lot of Jewish sources who truly believe that the Ark is somewhere beneath the Temple Mount. Their argument is this, that it would have been unthinkable to have the precious Holy of Holies and the Ark of the Covenant in there without some sort of chamber that you could take it to and hide it in the event of a siege of Jerusalem. And so, they argue that surely somewhere underground there is a special chamber where the Ark was put. They argue that the reason it was always empty during the time of the Second Temple was because they were under Roman occupation and they did not think it was appropriate to bring it out and put it in the Holy of Holies as long as they were under occupation. What do you have to say about that?

Dr. Fleming: That’s an interesting theory, and none of them are mentioned at the time of the Roman period. These were made later looking back.

There certainly was time for the priests to hide the Ark. It was several weeks from when the Roman’s broke in through the northern wall of Jerusalem until when they set the Temple platform on fire that they could have secreted it away. On the other hand, we are told that they thought because it was a Holy Temple that God would protect them. They even brought the women and children up to the Temple Mount just before it was all set on fire. They may have felt that maybe it would not fall and that God would somehow send a miracle and the city would survive.

Dr. Reagan: There are some who think the Ark was raptured and taken to Heaven and that John saw it in Revelation when he saw an Ark in Heaven. What about that?

Dr. Fleming: Again, it is one of those things. Is that a theological statement, or is it man shooting, or is it a historical event?

Nathan Jones: What about Ethiopia? Last year they was a big announcement. A church there was finally going to show the Ark sitting in their church in Ethiopia. Have you been to that church?

Dr. Fleming: Yes, I have. It is at a city named Axum. Every year at the Feast of the Ark of the Covenant it is brought out on a procession from the Miriam Church out to a water source. They tell you that you can look at the reflection of the Ark in the water, but you can’t look directly at the Ark. There is a government control over this. Now, every Ethiopian Orthodox church has a replica of the Ark in their own sanctuary of their church. The replica looks nothing like the biblical drawings of it, and so I would be very skeptical. 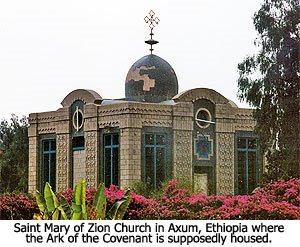 The other reason I’m skeptical has to do with the Queen of Sheba and Solomon.

Dr. Reagan: To me that is just absolutely absurd that there was this son born between Solomon and the Queen of Sheba who went back and got the Ark and took it down to Ethiopia.

Dr. Fleming: It goes that Solomon gave it to him as a gift!

Dr. Reagan: I think that it just crazy.

In Jeremiah 3:16 it says, “In those days when you are multiplied increase in the land declares the Lord, they shall say no more the Ark of the Covenant of the Lord and it shall not come to mind nor shall they remember it, nor shall they miss it, nor shall it be made again.” Does that have to do with the Millennial reign of Christ, or does it have to do with the Temple during the Tribulation?

Dr. Reagan: What about the book of Maccabees which says that Jeremiah took the Ark to what is now modern day Jordan and hid it in Mount Nebo?

Dr. Fleming: It doesn’t specifically say that in the Maccabees, but this is a view that is often mentioned. This has made some people look at Mount Nebo. In all, there are 16 places people have guessed where it could be.

Dr. Reagan: So, the bottom line is we just don’t know what happened to the Ark of the Covenant.

Dr. Fleming: I hate to say it again, but we cannot be sure.

Do Christians, Muslims and Jews Worship...