FHCO: Your Future in the Bible (Part 4)

Let’s keep going putting the Bible to the test. Let’s talk about the story. Is the story believable? This is another test of truth that we ourselves face everyday. 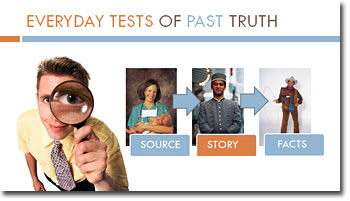 This got me thinking about my son Jacob. Jacob is seven years old and he is full of energy. He’s got a lot of stuff going on there, like losing his teeth, which as you know is a typical kid thing to do at that age. He is now missing his two front teeth. He was excited when he lost his first tooth last year because he was going go put it under his pillow for the Tooth Fairy. He was very excited about that. And so, he puts the tooth under his pillow.

Now, I’m not a bad parent, really I’m not. But, every now and then I am forgetful. I went to bed that night and when I woke up the next morning as I lay there, it just hit me like a bolt of lighting — oh my goodness, the tooth is still under the pillow and I didn’t put any money there! I’m sorry if I am spoiling it for you: Tooth Fairy = not real. Sorry. But, I realized I hadn’t put any money under his pillow. I checked and he was still asleep, so I still had time. I grabbed some quarters and snuck into his room all ninja like. I slid the money underneath his pillow thinking everything was good. I just had to get that tooth. I was feeling around, but couldn’t find the tooth. I was probing and probing when all of a sudden Jacob wakes up! He turns around and asks, “Dad, what are you doing?” Well, I thought quickly and answered, “Buddy, I was so excited to see what the Tooth Fairy would bring, I just couldn’t wait.” So, I pulled the pillow back and we marveled that the Tooth Fairy left him some money. She even left the tooth so he could save it as a keepsake. What kind of awesome Tooth Fairy is that?

Kids are so gullible, you’ve got to love it. My point is that they can hear the silliest stories and still believe them.

Now, we are not going to get into the morality of me telling such an obvious lie. That is for another time. But, the issue here is believability. For that we have to focus on the everyday test of truth. 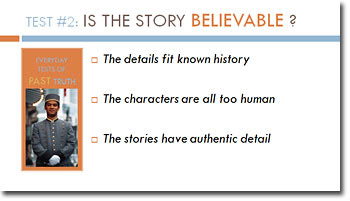 Test #2: Is the story believable?
A) The Details Fit Known History

I believe some things because they sound realistic. There is just that ring of truth when I hear a story. The story seems to match the things that I’ve seen in real life, and the details are convincing enough in everyday life. I decide if a story is believable, so I wonder what happens when I apply this same test to the Bible. What happens when I apply this test to the Bible? Does it show me that the Bible is faithful to the past? I am going to have to say, “Yes, it does!”

Consider the following, the details of the Bible stories fit known history. If it were a lie I would expect the Bible to be filled with made up facts along the way. But, historical and archaeology evidence verifies much of what we see in the Bible. It contains real people, and the existence of these people groups that it describes were out there. People from the Hittites to the Romans were real people. The leaders it discusses such as Cyrus, Nebuchadnezzar, Caesar Augustus, Pontius Pilot — they are all real people we can document.

The Bible describes real places. You go to Israel today and you can find Jericho, Jerusalem and the Jordan River. These places are in actual existence. It’s not talking about Narnia, or Hogwarts or Oz. This is real stuff. These are real places!

There are also real events that happened. Now, not everything in life gets recorded for posterity. I mean, mankind won’t know what you got for your birthday in 500 years, but a lot of major events did get recorded. We look through details in the Bible that are corresponding. We see the capture of Jerusalem by the Babylonians in 586 BC. It happened. It matches up. We read about the expulsion of Christians and Jews from the city of Rome in 49 AD with the Edict of Claudius. It talks about it in the Bible and history backs it up. It happened. Those things match up. The details make the story believable.

Test #2: Is the story believable?
B) The Characters Are All Too Human

We do a little more digging and we find out the characters are all too human. When we start looking through the Bible, if it were false, I would expect the people it described to be too good to be true, at least when it is talking about the heroes along the way. But, much like the authors who weren’t too interested in self-promotion, we find out that the Bible is not too interested in putting an inflated view of its subject matter out there. The characters are believable guys.

King David for example was a real hero, one guy that we look to and exclaim, “This was a man of God. He was a great guy.” And yet, it also talks about David being an adulterer and arranging a murder. These are not usually qualities you want out of a hero, but there they are for us to read.

Abraham is the father of our faith, and yet it talks about how he was out there lying to protect his own skin.

We see other heroes of the Bible like the Apostle Paul who was one of the most influential Christians to have ever lived. His story starts off with him being a strict persecutor of Christians. He approves the death and imprisonment of those who believe in a resurrected Christ. This is not exactly the picture of a guy that we would want running around for us out there. But, the Bible shares his whole story.

The characters of the Bible are way too human, and so the people are believable along the way.

Test #2: Is the story believable?
C) The Stories Have Authentic Detail

In John 21:11, it talks about a fishing incident involving Jesus. The story just throws in the detail that the fishermen caught 153 fish in the net. Okay, 153 fish, why would anyone make that up? It is just there.

First Chronicles 27:30 talks about the fact that Obil the Ishmaelite was in charge of King David’s camels and Jedeiah the Meronothite was in charge of the donkeys. And, we care why? Who would make that up? It just seems like an insignificant detail, but there it is.

In the final chapter of Colossians, Paul passes on greetings from random people like Aristarchus, Archippus, Demas, and Justus — people we don’t know anything about. We don’t know much about these guys. Why wouldn’t they if they were making this stuff up not include influential people. Peter says “hi.” Jesus says “hi.” Who really is Justus? Who is Demas? Who is this guy taking care of the camels and the donkeys? Nobody cares about them.

Why include these factoids unless they’re true? These real life details help me realize that the story itself is believable.

I will throw in this disclaimer: asking if the story is believable can be hard for a book that talks about the miraculous, such as a virgin birth, an Ark, a worldwide flood, and resurrections. If the whole thing were just a bunch of superstitious stuff along the way like Greek mythology with fictitious characters and places and events, then okay, it would be fine to dismiss it. But, the fact that the authors are so credible in their details, matching history, giving us realistic humans, and sharing details that no one makes up — that makes it easier for us to conclude, “I think they are telling the truth. I don’t think they are making this up along the way.” If the storyline is about a God who interjects Himself into history, then this could actually be plausible.

So, based on the details of the story, the Bible seems to be trustworthy. Do I trust it? Yes, I do!