FHCO: Your Future in the Bible (Part 5)

The final everyday test of past truth has to do with facts. We start looking at the facts and ask, “Do the facts line up?”

Here is a fact for you: Donald Trump is a successful businessman. I believe that even though there are still some things about that which puzzle me. I struggle with the fact that his enterprises have been involved in multiple bankruptcies. Most of all, I wonder how someone so powerful could have such bad hair. It just doesn’t make a lot of sense to me. I mean, really, his hair is just scary. It’s not right. But, it comes down to one argument. If I believe he is a successful businessman, then I have to reconcile it with the fact that his hair is so spooky. 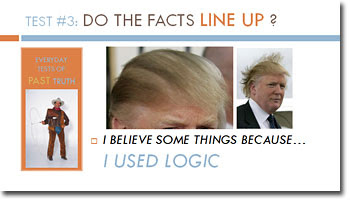 I believe in some things because I use logic. Now, on the bankruptcy issue, logic says that Trump has been able to separate his personal and cooperate finances, and so even though his company has had issues, personally he has been able to maintain a vast income, so he can be a successful businessman in terms of those results. Logic says this. I can figure that out.

My point is that in everyday life we face conflicting information that we have to make sense of. By using logic, we can reconcile these problems and conclude, “Okay, I think I figured out the truth.”

We can see that logic says riding on a airplane is pretty safe, even though I know some people have died doing it. I can say that texting while driving is not a safe thing to do, even though I have yet avoided a crash. Logic helps us see if the facts line up enough for us to believe, and that tells us it is true.

So, what happens when we apply this to the Bible? When I start thinking about using logic here and figuring out the facts, I find out some different things using the test: “Do the facts line up?” 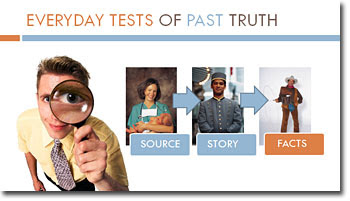 Test #3: Do the facts line up?
A) Inaccuracies Aren’t So Inaccurate

First of all, I say that the inaccuracies that we find in the Bible really aren’t so inaccurate.

Let me give you an example out of 1 Kings 7:23. Skeptics like to point out the dimensions listed in 1 Kings 7 of a round basin. They like to point out that the dimensions just don’t match up. It’s got a diameter of 10 and a circumference of 30, and if you calculate this out then the value of Pi has to equal 3, except we know that Pi does not equal 3. It equals 3.14 and all sorts of decimal points. “See, it’s inaccurate, the Bible is wrong, they can’t do that!”, they proclaim. But, we could look at that and observe, yeah, that is true that it doesn’t match up exactly. But, that is expecting a level of scientific precision that most of us don’t use.

If somebody asked you how much money you made last year and you rounded off to the nearest $10,000, are you lying? Are you inaccurate? No, you are just rounding off.

If we remember that cubits, the measurement that they were using back then, weren’t quite as precise as meters. When we think about rounding, we realize doing that makes sense. Thirty is close to 31.4, so if they are just using round numbers, well that is just fine. The inaccuracy that we find isn’t so inaccurate after all. It’s just not that accurate.