FHCO: Your Future in the Bible (Part 6)

Test #3: Do the facts line up?
B) Points of View Ultimately Align

The points of view in the Bible ultimately align.

Skeptics like to point to the Bible and say there are conflicts between biblical ideas. They’ll argue that in one place it says “X” and in another place it says “Y” and those things don’t match up, so we can disregard the Bible because it is just full of contradictions. But, viewed properly, the contradictions actually match up.

For example: faith versus works. Some people bring this up that Paul says in Ephesians 2:8, “That we are saved by grace through faith.” But, in James 2:14 James says, “If somebody has faith but not works can his faith save him?” The answer seems to be no. We then conclude that since those don’t seem to match up — one says faith, one says works — there is conflict, so we should just regard it.

But, if you just understand the perspective, it all makes sense. Paul is pointing out that none of our works are sufficient to save us. We don’t earn our salvation. It’s a free gift. James is pointing out that the faith that we have needs to be living and active and not just lip service. Taken together, those two just paint a good picture of what the truth is. We are saved by faith alone, but true faith will end up demonstrating itself by the things that we do. There is no conflict. It is just presenting two sides of the same coin.

Those points of view that seem in conflict really ultimately align.

Test #3: Do the facts line up?
C) Moral Problems Aren’t a Problem

We also find out that moral “problems” really aren’t a problem.

Critics of the Bible sometimes like to take the moral high ground. They say the God presented in the Bible does not act like how God should act. If He is a good God, then why does He allow such terrible things to happen to good people?

For example: Joshua and the Israelites. In Joshua 6, the Israelites are commanded to completely destroy the people who live in Jericho. They are supposed to go in there and wipe them all out. That is indeed a tough teaching, but if we stop and think about it, we can figure this out. We can rationalize some of this, because God Himself explains the reason. God explains that the people who lived in that land were wicked and they were going to turn the Israelites away from worshipping the true God and start worshipping false gods. God’s intent was to set up this model nation in a strategic crossroads, and the best chance of success was to start off with a clean slate where He doesn’t have these pagan influences turning His people away from Him.

We can think about that logically, but we also have to stop and ask ourselves, “Am I God?” Just maybe I don’t know everything. Maybe I don’t have all of the knowledge of the situation. Do I know the whole situation? Do I have God’s knowledge? Does God use my standards of morality, or am I supposed to be using His? When I start to look at this, it is tough! But really, we can start to come to grips with some of the challenges there by asking these questions.

If we decide we believe the rest of the Bible to be trustworthy, especially the parts which say God is perfectly just, that He is good, that He is holy, that He is loving, then we have to have to assume that somehow these commands fit in with that. After all, we do that with our own country. We believe that we live in a good country and when we fought against Hitler in World War II that was a good thing, despite the fact that some innocent civilians died in the crossfire. We can still say we are a good nation because of that. If we can do that with our own nation, shouldn’t we at least be willing to do that same thing with God? 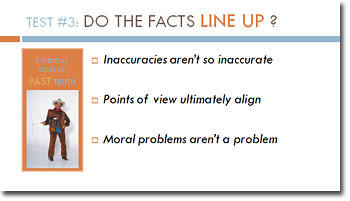 Based on reconciliation of facts the Bible seems trustworthy. Do I trust it? Yes!

Reviewing the Tests of Past Truth

When I look at past truth, I can know the Bible faces these everyday tests, passing each one of them.

The source seems trustworthy. The story seems believable. The facts line up enough for me to say that it is true. And, in everyday life, I would believe something like this account. So, when I look at the Bible and the past truth that is presented in there, I can conclude so far that the Bible is true.