The Beginning and the Ending: Creation Maligned

Regarding the origins of our planet and life, the Bible plainly reveals that both were created by God in six days about 6,000 years ago.

Christendom seemed to have no problem with this revelation until the 19th Century. Scientists before that time — even the man acknowledged to be the greatest scientist in history, Sir Isaac Newton — believed the biblical story and affirmed it in their writings.

The Attack of Science

But in the 19th Century, scientists began to challenge the biblical story, reaching its culmination with Darwin’s Theory of Evolution which was proposed in 1859 in his book, On the Origin of Species.2

As the 20th Century began, the Bible was on the defensive, and the battle came to a climax with the Scopes Trial in 1925 when William Jennings Bryan tried to defend the biblical view while Clarence Darrow mocked and scoffed.3 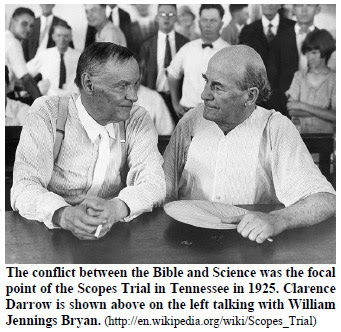 In response to the relentless attacks of scientists, Christian theologians scrambled to try to make the biblical story line up with the claim of the scientists that the universe was billions of years old and that all life had evolved haphazardly from a single source.

This was accomplished primarily in one of two ways, or a combination of both.

First, was the Day-Age Theory that converted each day of the Genesis creation week into a million or more years.

The second was the Gap Theory. According to this idea, there is a gap of millions or billions of years between the first two verses of Genesis.

There are different versions of the Gap Theory, but all versions postulate that God’s original creation was most likely corrupted by the rebellion and fall of Satan. Then millions or billions of years later, God decided to bring order out of the chaos by re-creating the earth and its heavens. Some who subscribe to the Gap Theory believe that the re-creation process took only 6 literal days. But most would contend that each of the days were actually millions of years.

They thus combine the Gap Theory with the Day-Age Theory and end up with a creation process that took place over a time span of billions of years.

Today, the Gap Theory, or some version of it, is held by most Christians — even Evangelicals. Many believe that God intervened at some point and created Man.

But many, if not most believe in Theistic Evolution. In other words, they believe God created all life, but that it emerged over a long period of time through a process of guided evolution.

When challenged to simply believe the creation story in the Bible, they often respond with scoffing.

I experienced this early in the history of this ministry when I was speaking to the combined adult Sunday School classes of a church in Oklahoma. I just happened to mention in passing that we should accept the Genesis story of creation to mean what it says — namely, that God created the universe and life supernaturally in six literal days some 6,000 years ago. That off-the-hand remark prompted an explosion! A man jumped to his feet and started yelling. “I can’t believe that you believe such nonsense,” he shouted. He then added, “It’s ignorant people like you who make Christians look like fools!” At that point, he stomped out of the room.

Here’s another example of what I’m talking about. In 2009 we aired a series of television programs with Dr. Jobe Martin who has a great ministry that focuses on the Creation-Evolution conflict.4 In one of those programs, he told why he believes the Genesis story of creation means exactly what it says.

In response, I received a letter from a Christian who watched the program via satellite in Latvia, one of the former Russian Baltic Republics. He wrote:

Is the cause of Christ really advanced by having on your show a wild-eyed fanatic who cannot comprehend the concept of proof? Possibly we are not talking about the same Creator? My Lord can not lie, thus, He cannot create an old-looking earth to deceive the modern man… Satan’s best troops in the battle to stymie Christianity are the Young Earth advocates. There are hundreds of reasons that speak of earth’s age, but the wellmeaning fools refuse to learn some science before they argue against it… Dear sir, preach what you will but not in the name of Christianity. Do not make my Lord a deceiver and Christians an uneducated lot.

And lest you think these are isolated examples, let me point out that a group of Evangelicals have formed an organization called BioLogos whose purpose is to convince Christians that “the process of evolution is a tenable biblical position, and… is the best Christian apologetic to defend Genesis 1-3 against its critics.”5

This group has actually taken the position that if Christians do not accept the theory of evolution, the Church will soon die off, because it will be rejected as “an insignificant cult.”6

The relevance of this issue was demonstrated recently on the cover of Christianity Today magazine, published in June 2011.7

This is a magazine founded in 1956 by Billy Graham to espouse and defend biblical truths. But in recent years, it has become increasingly liberal, while still claiming to be Evangelical.

The magazine’s cover featured a drawing of Adam as a Neanderthal looking person, and the lead article presented him as being most likely a mythical person. The article is also a shameless apologetic for Theistic Evolution. 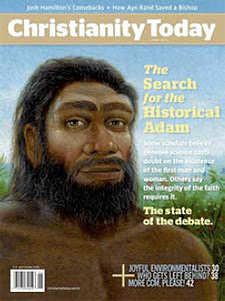 In the next part of this series on the beginning and the ending of the Bible, I’ll look at how people scoff at the Creation account and then answer these skeptics.

3) Dr. David Menton, “The Scopes ‘Monkey Trial’ — 80 Years Later,” www.answersingenesis.org/docs2005/0711scopes.asp. It should be noted that Bryan did not believe in a young earth. He took the Day-Age position, arguing that each day of creation represented millions of years.

4) Jobe Martin’s outstanding book about his conversion from Evolution to Creationism is titled, The Evolution of a Creationist. It can be obtained from Lamb & Lion Ministries for $15 plus the cost of shipping. To order, call 972-736-3567.