Our Young Earth: Why Age Matters

In the previous part of this series, we looked at the inherent problems with radiometric dating, especially using the uranium-lead clock which looks at tiny crystals of zircon that are found in granite. Let’s continue to look at these problems.

A Bigger Problem: Many Clocks Support a Young Earth

Helium in zircon: During the change of each atom of uranium to an atom of lead, eight atoms of helium are produced. The rate at which helium leaks from zircon has been measured. There should be virtually zero helium left in zircon if the samples are truly billions of years old, yet the large amount of helium found in the samples indicates an age of only 6,000 (±2,000) years.11

Carbon 14 in Diamonds, Coal, and “Old” Rocks: Carbon 14 has a short 5,730 year half-life, so it is used to date archeological samples that are thousands of years old, but not anything expected to be millions or billions of years old. There should be virtually zero carbon 14 in anything older than 60,000 years, yet dating labs worldwide have known since the 1980’s that significant quantities of carbon 14 are routinely found in diamonds, coal, oil, and other organic compounds in rock strata that are supposed by Evolutionists to be millions of years old.12 This is further scientific evidence that the Earth is only thousands of years old. 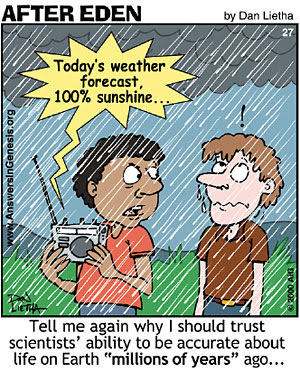 DNA Mutations: Mitochondria are the power plants in every cell — plant or animal. Geneticists have studied the rate of mutation (genetic damage) in the DNA of human mitochrondria, which are passed only by the mother, and they have concluded that the mother of all humans — Eve — would have lived only 6,000 years ago.13 Accordingly, they think there must be something terribly wrong with their data. But I see it as further evidence of a young Earth.

Fossil DNA: Evolutionists insist that DNA cannot survive longer than 10,000 years, yet bacteria supposed to be 250 million years old have been revived with intact DNA,14 insects trapped in amber have yielded intact DNA strands despite their alleged age of millions of years,15 and dinosaurs — supposedly extinct for 65 million years — have been found with soft tissue and blood cells complete with largely intact DNA.16 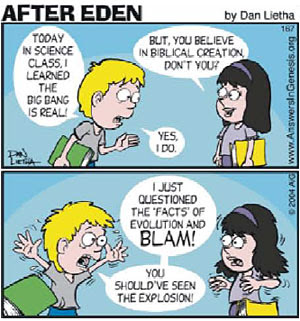 Continent Erosion, Seafloor Mud, and Salty Oceans: Geologists have measured the erosion rate of continents and found that it would take only 50 million years to erode continents down to sea level.17 If the continents were truly 3.5 billion years old, they would be flat, just above sea level, and there would be no layers of rock strata. Continental erosion deposits 20 billion tons of mud (fine rock and dirt) on the ocean floor each year. If all the ocean floor sediment had been deposited this way, then it would have taken less than 12 million years. If the Earth were really 4.5 billion years old, the oceans would be choked with mud.18 If the oceans started as fresh water with zero salt, they would have reached their current level of saltiness in about 42 million years.19 All of these estimates, which don’t include the effects of Noah’s worldwide flood, argue that the Earth cannot be billions of years old.

Earth’s Magnetic Field is Rapidly Decaying: The Earth’s magnetic field has a total energy that is decaying rapidly at a rate for which the Earth could not be older than 20,000 years.20 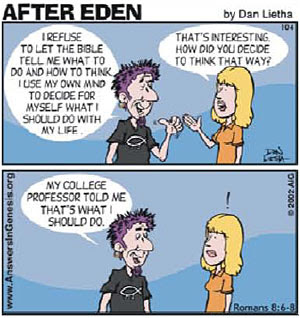 Overpressured Petroleum Reservoirs: The Gulf of Mexico, for example, has deep deposits of petroleum (oil and gas) that are “over-pressured,” that is, at very much higher pressures than expected for their depth below the ocean and sediment. The 2010 BP Deepwater Horizon oil spill21 is a prime example. When I worked for BP and Shell in the 1980’s, we calculated (but could not publish) that the petroleum should have completely leaked out of the over-pressured reservoirs in less than 50,000 years. The integrity of the sediments will simply not hold that much pressure. In fact, there are spontaneous natural oil seeps throughout the Gulf of Mexico. The best explanation for the existence of these overpressured reservoirs requires a worldwide flood with very rapid deposition of plants and animals, rapidly covered by sediments, at a pressure and temperature that can produce petroleum in a few centuries.

Moon dust: Do you remember the fear that the first moon landing would be a disaster because the landing craft would sink in very deep moon dust? Scientists had calculated the rate at which moon dust is made by the impact of meteors on the lunar surface. Assuming that the moon is also 4.5 billion years old (the supposed age of the Earth), the dust should have been 20 feet thick. In fact, it is less than an inch thick, consistent with thousands, not billions of years. The Apollo 11 “Eagle” landing module did not sink in moon dust.

More Evidence for a Young Earth

I have selected only a few highlights of the scientific evidence that is mounting for a young Earth that is thousands of years old, not millions or billions. You may find many more resources at websites such as the Institute for Creation Research and Answers in Genesis.

Keep in mind that there are relatively few scientists brave enough to publish evidence for a young Earth and creation, so the volume of material is smaller than that published by the Evolutionists. Recall also that Evolutionists discard most raw data and bury it without publication because it does not confirm the Evolution Theory.

Jesus claimed to be “the truth” (John 14:6) and proclaimed that “the Scripture cannot be broken” (John 10:35). Jesus is identified as the Creator: “Through Him all things were made” (John 1:3). What then did He say about His Creation? There is much evidence that Jesus accepted Genesis 1-11 as literal history. He referred to Adam and Eve, Cain and Abel, Noah and the worldwide flood as history, not allegory.

Does It Really Matter What We Believe About The Age Of The Earth?

I claim it matters very much. I came to faith in Jesus because I became convinced that I could trust the truth of the Bible account of Creation and the worldwide flood. Genesis and Revelation are the “bookends” of the Bible. Jesus is the “Alpha and Omega, the Beginning and the End” (Revelation 1:8; 21:6; and 22:13). If we cannot believe God about Creation and Noah’s worldwide flood, then we cannot trust Him about anything else in His Word. How could we trust Him to resurrect us for eternal life if we think He deceived us with His account of six days of creation?

I think it matters a great deal what we believe about the age of the Earth. There are many scientific reasons to doubt the claims of atheistic Evolutionists that the Earth is billions of years old. And there are many scientific reasons to trust the biblical account that the Earth is actually only about 6,000 years young and that a devastating worldwide flood has greatly altered the face of our planet, giving us rock strata, fossils, continental breakup, coal and oil, mountains, and more.

I trust that your faith has been strengthened by considering the scientific reasons that were presented in this article for believing in the biblical account of creation and a young Earth. Believing the Bible is the most reasonable thing that an intelligent person can do.

7) Wikipedia, “Radioactive Decay,” http://en.wikipedia.org/wiki/Radioactive_decay. It is actually the nucleus of the atom, made up of protons and neutrons, that decays by radioactivity.

10) Genesis 7:11 (NKJV): “…on that day all the fountains of the great deep were broken up, and the windows of heaven were opened.”

17) B. Thomas, “Continents should have eroded long ago,” http://www.icr.org/article/continents-should-have-eroded-long.

22) Dr. Terry Mortenson, “Jesus, evangelical scholars, and the age of the earth,” http://www.answersingenesis.org/articles/aid/v2/n1/Jesusand-the-age-of-earth.