The Challenge of Evolution: Counterfeit Religion

Is Evolution really a religion, and if so, why?

Lamb & Lion Ministries conducts a number of Bible conferences in the Dallas, Texas area each year. Our June 2011 conference theme was Christianity Under Attack.

On of our speakers was Dr. John Morris, the president of the Institute for Creation Research. He has a doctor’s degree from the University of Oklahoma in geological engineering. He is the author of numerous books, including The Young Earth. He has also led numerous expeditions to Mt. Ararat in search of Noah’s Ark. Dr. Morris’ topic at our conference was “The Challenge of Evolution” (watch).

The Religion of Evolution

I really think Evolution is the religion of naturalism because it believes there is nothing supernatural at work on planet earth. This is a worldview. It’s in its truest sense a religion. Therefore, Evolution is also an anti-Christian religion. It’s the religion that believes natural processes have done it all, including natural selection, when it comes to everything existing that does so today.

Remember that science has to do with observation. That’s what scientists do. They make their observations. They perform their experiments. They collect the data. They make observations. But, when we are talking Evolution and Creation, we can’t observe them. If they happened at all they happened in the unobserved past when nobody was watching, because they are not happening today. We can’t see Creation happen. I’ve got to tell you, no Evolutionist will claim that they’ve ever seen Evolution take place. They say it happened in the past when I wasn’t watching. Well, Creationists say the same thing. Both of these are worldviews concerning unobserved history. This is not strict science here, rather it’s a philosophy about the past. Evolution in truth is a worldview about the past, trying to explain the fact that you and I are here and are what we are without a supernatural God.

Darwin thought Evolution up because he had given up on God. He knew we had to have gotten here some way, and with only natural law to work with, natural selection became Darwin’s best guess. But, Evolution doesn’t fit the scientific evidence very well.

So, both views — Creation and Evolution — are about unobserved history.

We don’t observe Evolution or Creation happening in the present, but we do see mutation happening all the time. In fact, all of you have mutated while you’ve been reading this. You are all mutants. Thankfully, your cells are so well designed they find those mutations and fix them before they can do any damage. So, we do see mutations, but they’re not innovative. They’re not helpful.

We also do see survival of the fittest, but that’s kind of a totalitist thing. I mean, the fittest survive therefore they survived? Yeah.

Mutations and survival of the fittest are impotent to bring about true evolutionary change. To go from a frog to a prince you need a lot of really helpful mutations. But, again, mutations are overwhelmingly harmful and not helpful or innovative. They are what we call birth defects when they get into the reproductive cells. That’s what a birth defect is — a mutation. Evolutionists claim that trillions of helpful birth defects have turned that frog into a prince. You know we’ve never observed one helpful birth defect. You could count them on the fingers of one hand, even if you are a mutant and don’t have any fingers. Beneficial mutations — that’s a contradiction in terms. It doesn’t happen. These are harmful, not helpful.

Evolution goes uphill, but what we see naturally is going downhill. We do see survival of the fittest, but that’s not really natural selection.

Biblically, what’s really happening is that the organism itself was created with these marvelous powers to adapt and vary so that it can survive. God has built that into the organisms, not into nature doing the selection. The organism itself varies in order to survive.

For one, Evolution doesn’t happen in the present. Evolutionists will say, “Oh, well maybe it happened in the past when we weren’t watching.” Well, we do have a record of life in the past and that is in the fossil record.

For example, let me show you a little bit about the fossil record using the trilobite. Trilobite fossils can be found in one of the lowest levels of the geologic strata, the oldest levels, say 500 million years ago according to Evolution. I don’t buy the number, but don’t get hung up about the number. I think that’s a wrong number. Anyway, according to them 500 million to 550 million years ago this creature lived. The trilobite is a very common fossil. Evolution says you go from simple to complex, or ameba to man, right? Simple to complex. But, I’ve got to tell you, these trilobites down here at the bottom which are supposed to be the oldest, well they are quite complex. This creature is as complex as any creature around today. 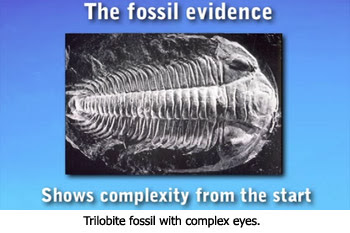 Life started out complex, and it’s still complex. There’s no such thing as simple life. If it’s living, its complex. If it’s simple, it can’t live. There’s really no such thing as simple life. Life has always been complex. For example, the trilobite, sometimes in the fossils you can even see the eyeball which contains a complex lens. This, supposedly the most ancient of creatures, is as complex as any eyeball that’s around today.

In the final part of Dr. Morris’ presentation on the challenge of Evolution, he’ll explain what three beliefs are foundational to the Christian worldview.

The Christianity Under Attack 2011 Bible Conference takes an in-depth look at some of the attacks on Christianity. Learn how to counter these attacks in this 6-part conference album!