The Abomination of Abortion: Abortionist Arguments 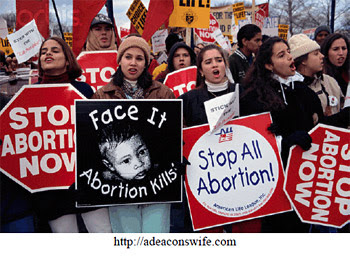 I realize there are many sincere people, even professing Christians, who believe abortion should be a matter of personal choice. These people have developed many sophisticated arguments in behalf of abortion. But those arguments do not stand the test of Scripture or logic or experience.

1) “Is it fair,” the abortionists ask, “to bring a baby into the world who is unwanted?” This argument is an emotional deception. There is no such thing as an unwanted baby because there are hundreds of thousands of couples in America today who ardently desire to adopt a child.

2) “But what about rape victims?” the abortionists scream. Again, this argument is an emotional manipulation. Less than one percent of rape victims ever conceive, due probably to the trauma involved. But even in those situations where conception does occur, should the baby be killed for its father’s crime?

3) “But we must provide for the protection of the mother’s life,” argue the abortionists. But is this a valid issue? Consider these words by the former Surgeon-General of the U.S., Dr. C. Everett Koop:

4) “But what about a deformed or retarded child? Shouldn’t it be aborted?” What about a child who becomes mentally retarded or blind at age six due to an illness or accident? Should that child be killed? How perfect must a person be in order to live? And who is to play God by making the decisions as to who lives and who dies?

5) “If abortion is outlawed again, tens of thousands will die from back-alley abortions performed by medically unqualified people.” In 1972, the year before the Court legalized abortion, it is estimated that there were about 500 abortions nationwide, resulting in 39 recorded deaths (see Dr. Bernard Nathanson’s book, Aborting America). We are killing 1 1/2 million babies per year right now, and hundreds of women die from the complications.

The bottom line in all these arguments is whether or not the baby in the womb is a human being. If it is, as God’s Word teaches, then it should be accorded the full protection of our Constitution.

In the next part of this series on the abomination of Abortion, we will look at today’s cowardly politicians who refuse to do what is right.