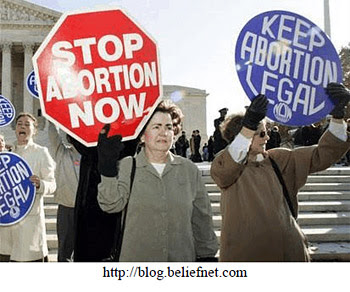 The humanity of the baby in the womb is confirmed in the New Testament in a story related to the birth of Jesus.

We are told in Luke 1:39-44 that when Mary became pregnant with Jesus, she went to see her relative Elizabeth who was pregnant with John the Baptist. When Mary came into the presence of Elizabeth, the Word says that the baby in Elizabeth’s womb leaped with joy over the presence of the Christ child who was yet to be born! Was Jesus a human being in His mother’s womb? Was John the Baptist?

God’s Word tells of a baby leaping with joy in his mother’s womb. All across America today we have babies writhing in agony as they burn to death in their mothers’ wombs from injected saline solutions.

Our society has reached the same despicable level of degradation that characterized the ancient nation of Judah when God poured out His wrath upon them. The prophet Isaiah wrote of that nation: “Men call evil good and good evil” (Isa. 5:20). That’s where we are today.

Our nation is characterized by many grievous sins. For example, we are the moral polluter of planet earth through the exportation of our violent, immoral and blasphemous television programs and movies. We are also encouraging a plague of homosexuality worldwide. But our most horrible sin by far is the seal of approval that we have placed on the murder of babies in their mothers’ wombs. We have the blood of the innocent on our hands, and that blood is crying out for revenge.

As we have rejected God’s laws in favor of Man’s philosophical meanderings, we have perverted and distorted the Judeo-Christian value system that made this country so great. Our Humanistic values now reflect a perverse sense of priorities.

For example, we require parental consent for a girl to get her ears pierced. But she can get birth control pills and an abortion without anyone’s consent. We protect bald eagles and their eggs with stiff fines and prison sentences while we encourage people to kill their unborn babies. We weep over the killing of whales and rejoice over the slaughter of human babies.

Like the Nazis who dehumanized the Jews by calling them “vermin” and “parasites,” the abortion advocates have dehumanized the baby in the womb by calling it anything except a baby. To them the unborn child is “a chunk of tissue,” “gametic materials,” “fetal tissue,” or “protoplasmic rubbish.”

The widespread practice of abortion is desensitizing the American people to the value and dignity of life. This, in turn, is preparing us to accept the same atrocities which the Nazis committed — namely, infanticide and euthanasia. Both practices are becoming more common in this country and both are being advocated more and more openly.

After all, what is the difference in killing a baby in the womb a week before its scheduled delivery and killing it a week after it has been delivered? Why not give the parents a waiting period after delivery to decide if the baby should live? That way they could order it killed if it was the wrong sex, or had the wrong color of hair, or had a handicap of some sort.

In the next part of this series on the abomination of Abortion, I will debunk some of the arguments abortionists use to justify their murders.