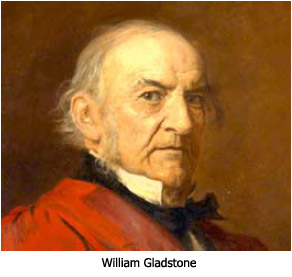 One of the greatest public servants in the history of England was William Gladstone (1809 – 1898) who served as Prime Minister four times during the latter half of the 19th Century.

Gladstone was a committed Christian who always attended church. He also taught a Sunday School class throughout his adult life. In fact, his aim early in his life was to become an Anglican clergyman, but after his graduation from Oxford, his strong-willed father insisted that he enter politics.1

Shortly before he died, Gladstone gave a speech in which he told about being visited by an ambitious young man who sought his advice about life. The lad told the elder statesman that he admired him more than anyone living and wanted to seek his advice regarding his career.2

“What do you hope to do when you graduate from college?” Gladstone asked.

The young man replied, “I hope to attend law school, sir, just as you did.”

“That’s a noble goal,” said Gladstone, “Then what?”

“I hope to practice law and make a good name for myself defending the poor and the outcasts of society, just as you did.”

“That’s a noble purpose,” replied Gladstone. “Then what?”

“Well, sir, I hope one day to stand for Parliament and become a servant of the people, even as you did.”

“That too is a noble hope. What then?” asked Gladstone.

“I would hope to be able to serve in the Parliament with great distinction, evidencing integrity and a concern for justice — even as you did.”

“What then?” asked Gladstone.

“I would hope to serve the government as Prime Minister with the same vigor, dedication, vision, and integrity as you did.”

“And what then?” asked Gladstone.

“I would hope to retire with honors and write my memoirs — even as you are presently doing — so that others could learn from my mistakes and triumphs.”

“All of that is very noble,” said Gladstone, “and then what?”

The young man thought for a moment. “Well, sir, I suppose I will then die.”

“That’s correct,” said Gladstone. “And then what?”

The young man looked puzzled. “Well, sir,” he answered hesitantly, “I’ve never given that any thought.”

“Young man,” Gladstone responded, “the only advice I have for you is for you to go home, read your Bible, and think about eternity.”

Think about eternity! What good advice. Life goes by so quickly. It is like a vapor that is here one moment and evaporates the next. We are preparing for eternity. Are you ready?

Or, are you living like you expect to live forever? Are you focused on this life, determined to accumulate all the money, power and fame you possibly can? Are you like the young man who visited Gladstone — are you a person who has never given eternity a thought? If so, the Word of God has a stern warning for you (James 4:13-15):3

And now I have a word for you who brashly announce, “Today — at the latest, tomorrow — we’re off to such and such a city for the year. We’re going to start a business and make a lot of money.”.

You don’t know the first thing about tomorrow. You’re nothing but a wisp of fog, catching a brief bit of sun before disappearing.

Instead, make it a habit to say, “If the Master wills it and we’re still alive, we’ll do this or that.”

In the second part of this series on living with an eternal perspective, we will explore the fleeting nature of life.

2) There are many versions of this conversation that circulate on the Internet, all making the same point. The version reproduced here is a composite prepared by the author.