Topics in the Prophecy Zone 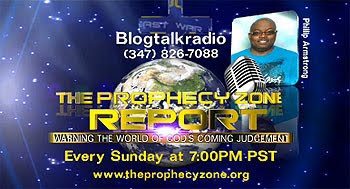 On Wednesday, October 2nd I was interviewed by Phillip Armstrong of the Prophecy Zone Radio News talk show, broadcast on BlogTalkRadio. I came on as the first hour guest on this two part program, followed by Terry James of Rapture Ready.

Phillip and I discussed a plethora of end time topics, such as:

Listen to the first hour of the program with Nathan Jones! The interview begins in earnest at time mark 15:30.

(My apologies for not having a written transcript
of this interview available.)