Donald Trump’s campaign slogan is “Make America Great Again!” He claims he can do that because he is “The Great Deal Maker.” He promises to create jobs, stop illegal immigration, bring American corporations back home and rebuild our military.

It sounds great, but there is no way he can succeed. The reason is simple. We as a nation have turned our back on God. We are in the process of thumbing our nose at the very One who made our nation the greatest one the world has ever known.

The Origin of a Slogan

The “shining city upon a hill” has become a darkened slum whose light has gone out.

The characterization of America as the “shining city upon a hill” has been traced to the Puritan leader, John Winthrop. He used the phrase in a sermon he delivered in 1630 on the ship Arbella while it was en route to the New World. He told his future Massachusetts Bay colonists that their new community would be “as a city upon a hill,” that would be watched by the world. It was one of the earliest examples of what would come to be known as the concept of “American Exceptionalism.”

The concept proved to be true as God poured out His blessings on the fledgling new nation. America became a shining example of freedom, prosperity and hope. People came from all over the world seeking an opportunity to escape from tyranny and poverty. And Americans responded to their blessings by sending out Christian missionaries all over the world and by printing and distributing Bibles in many languages.

As the 20th Century dawned, we became the “Arsenal of Democracy” as we came to the rescue of Europe in World War I and then fought in both Asia and Europe during World War II to defend the world against German and Japanese Fascism. By the end of the Second World War, we were the dominant power in the world.

But at the height of our glory, we took our eyes off God and began to revel in the pride of our accomplishments. The decade of the 60s proved to be the turning point as we thrust aside God’s Word and launched a sexual revolution. The free grace of God was surrendered to the free love of Man. Then came the plague of homosexuality which ultimately led to the abomination of same-sex marriage.

Meanwhile, our Supreme Court became determined to secularize our nation. Whereas the Court had ruled in 1892 (in the case of Church of the Holy Trinity v. United States) that “this is a Christian nation,” in the last half of the 20th Century, the Court made several crucial decisions designed to put a wall of separation between Christianity and society.

Prior to the mid-20th Century, the ruling principle had been separation of church and state, in the sense that there could be no official state church. But the Court suddenly began to interpret the Constitution to mean there must be a separation of religion from the state. The crucial decisions were as follows:

The Court, in effect, declared war on the Judeo-Christian heritage of our nation which is the reason we became “a shining city on a hill.” The clear intent of the Court was made plain in its declared reasoning for outlawing the posting of the Ten Commandments:

Unbelievable! The Ten Commandments have served as the cornerstone of Western civilization and law, and yet our children are denied exposure to them on the basis that they might obey them!

It is illuminating to consider the fact that ever since prayer and the Ten Commandments were banned from our schools, our educational institutions have become jungles of violence. 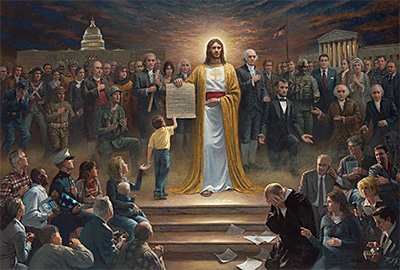 “One Nation Under God” by Jon McNaughton.
Read the detailed explanation of every aspect of this remarkable painting.

Meanwhile, The Church began adapting to the paganization of our nation as it sought the approval of society. So-called Evangelical leaders launched the Emergent Church Movement which is designed to bring about a Second Reformation by abandoning the authority of the Bible, elevating the importance of feelings and denying the existence of absolute truths.

Concurrently, the Seeker-Friendly Movement sought to downplay the offensive nature of the Gospel by camouflaging the Church as a social organization designed to provide entertainment and social services.

The overall result was the abandonment of biblical preaching in favor of warmed-over inspirational talks from the Reader’s Digest. Church members were rendered biblically ignorant, and thus they became sitting ducks for all sorts of apostasy. Before long, Christians were embracing homosexuality, same-sex marriage, gambling and even abortion. And churches began to ordain practicing homosexuals and persons who did not even believe in the deity of Jesus.

In summary, the Church got in bed with the world, and it ceased to have any meaningful impact on society — all of which contributed to the acceleration of the secularization and paganization of our society.

The irony is that none of this seemed to placate the haters of Christianity. In fact, as they witnessed Church leaders giving in to their demands, they lost all respect for them and started accelerating their demands. Whereas the Judeo-Christian faith had always been the foundation of American society, by the end of the first decade of the 21st Century, it had been abandoned in favor of a Humanist and Hedonistic culture.

In the second segment of this series on America’s final years, we’ll discern if biblically this nation has reached the tipping point.