God and the Weather 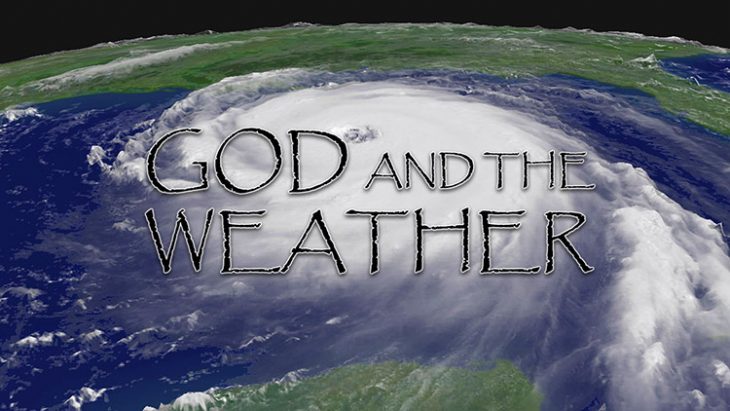 Last week on our television program Christ in Prophecy, I began sharing a message with you titled, “God, Judgment and the Weather.” In that message I looked in-depth at what the Bible has to say about God and the weather.

Both the Bible and history attest to the fact that God has a pattern for working with nations. First of all, the Bible teaches beyond a shadow of a doubt that God is the one that raises up nations, and He is the one who sets their boundaries, and He is the one who gives them purpose. And, when a nation begins to rebel against Him, the first thing God will do is raise up prophetic voices to call the nation to repentance.

When I say prophetic voices, I’m not talking about people with supernatural knowledge about the future. I’m talking about the gift of prophecy as it operates today, where God gives to certain individuals the supernatural ability to take the Word of God and apply it to contemporary events. When you find a person who can take the Word of God and preach about abortion or the national debt or same sex-marriage — that’s the gift of prophecy. There are people who have that gift, and so, God raises up these prophetic voices to call a nation to repentance.

These are the people who look at the Word of God and then declare that the nation is in violation of God’s moral law. They know from the Word of God what’s going to happen, not because they have supernatural knowledge of the future, but because they know that God deals with nations according to a certain pattern. He will deal with a nation when it doesn’t repent. So, people with the gift of prophecy today call nations to repentance.

Finally, if the nation sets its jaw against God and refuses to repent, God will then deliver the nation from judgment to destruction. The Bible over and over uses a very special term when it says that God judges when “the wound becomes incurable.” That term is used by nearly all of the prophets. When the wound becomes incurable, that’s when God moves a nation from judgment to destruction.

I proceeded to give many biblical examples of God using natural calamities as remedial judgments to call nations to repentance. I then shifted to our own nation as an example of God responding to rebellion with remedial judgments.

Our own nation is a good example of what I’m talking about. We have been blessed like no other nation that has ever existed, except for the nation of Judah. Only America has been blessed by God like Judah was. And yet, in the 1960’s, this nation began to thumb its nose at God. A cultural revolution was launched, and very quickly we descended into a cesspool of sexual promiscuity, drug abuse, abortion on demand, legalized gambling, rampant blasphemy, and a flood of pornography. The lifestyle of hedonism swept across our nation and we ended up calling good evil and evil good.

God responded by raising up prophetic voices to call this nation to repentance. One of the most important was the voice of Dave Wilkerson, the pastor of Times Square Church in New York City. In the early 70’s, Wilkerson began to speak out very forcibly about the sins of this nation and warned that if we did not repent God was going to send judgment after judgment after judgment. He didn’t have any supernatural knowledge of the future, he just knew the Word of God. He knew that when a nation was blessed like ours and rebelled against God that God was going to place judgments upon it.

When we ignored the prophetic voices, God responded by sending remedial judgments like the Vietnam War, like the AIDS epidemic, like the plague of sexually transmitted diseases, and like the outbreak of homosexuality. God also inflicted our nation with natural disasters such as quakes, floods, tornadoes, and even an incredible volcanic eruption.

All of these judgments culminated, I believe, in the attacks of 9/11. I believe 9/11 was God’s major wake up call to this nation to repent of its immorality.

Have you ever stopped to think that the United States is a far greater threat to the world than the Soviet Union had ever been because we are the moral polluters of planet earth? Everywhere on this planet, when you turn on the TV set, you’re going to see the most immoral and the most violent American movies and American television shows. We are the moral polluter of planet earth, and God is going to hold us responsible for it!

I don’t think it was any accident that on 9/11 what was attacked were two symbols of American pride. What is it that America takes pride in? The two symbols of money and power were attacked. God sent us a wake up call and, unfortunately, we are like the guy who is very sleepy and when the alarm goes off we just rolled over and hit the snooze alarm. Soon after 9/11, we went right back to sleep spiritually.

On this week’s episode of Christ in Prophecy, I want to focus on a new factor that I believe is producing remedial judgments upon this country. It is our mistreatment of Israel which began in the early 1990’s. We as a nation have failed to realize that since 1991 many of the judgments that we have experienced have been related to our mistreatment of the nation of Israel.

The Bible says two very important things about this. Genesis 12:3 states, “I will bless those who bless you and I will curse those who curse you.” That is part of the Abrahamic Covenant, an eternal covenant that God made with Abraham. I’m going to bless those who bless the Jews and I’m going to curse those who curse the Jews. In Zechariah 2:8 we learn, “For the Lord said, ‘He who touches Israel touches the apple of my eye.'” Those are very serious statements and history attests to the truth of it.

I believe the message of God using weather as a judgment is that God is on His throne. God is in control. He cannot be mocked. He will not tolerate the division of His Holy Land, nor will He tolerate gross immorality that mocks everything that is moral and decent.

#God will not tolerate gross immorality that mocks everything that is moral and decent. Click To Tweet

God loves our nation. He has blessed us more then any other nation. But, the Word of God says to those to whom much is given, much is expected. The Word of God also says He disciplines those whom He loves.

Another point God’s Word makes clear is that when He sends discipline, the fundamental purpose is never to punish. His fundamental purpose is to call us to repentance so that we might be saved. Here is the way Isaiah puts it in Isaiah 26:9, “When the earth experiences your judgments, the inhabitants of the world learn righteousness.”

No public official in our history has yet to see the spiritual implications of a disaster as clearly as did Abraham Lincoln when he evaluated the cause of the Civil War. In a proclamation which he issued on March 30, 1863, the President called for a National Day of Prayer and Repentance. Lincoln made this comment, “Insomuch as we know that by His divine law nations, like individuals, are subjected to punishment and chastisements in this world. May we not justly fear that the awful calamity of Civil War which now desolates the land may be but a punishment inflicted upon us for our presumptuous sins to the needful end of our national reformation as a people.”

Lincoln continued by saying, “We have been the recipients of the choicest bounties of heaven. We have been preserved these many years in peace and prosperity. We have grown in numbers, wealth, and power as no other nation has ever grown.” But, Lincoln added, “We have forgotten God. We have forgotten the gracious hand which preserved us in peace and multiplied, enriched, and strengthened us.” Listen to this, “We have vainly imagined in the deceitfulness of our hearts that all our blessings were produced by our superior wisdom and virtue.”

President Lincoln then ended with these words. “Intoxicated with unbroken success, we have become too self-sufficient to fill the necessity of redeeming and preserving grace, too proud to pray to God who made us. It behooves us to then humble ourselves before the Offended Power to confess our national sins and to pray for clemency and forgiveness.”

That’s the kind of proclamation we need today! The sad thing is, we have become so secular and so pagan that if our President were to issue such a proclamation today, I have no doubt that someone in Congress would issue an indictment of impeachment for the violation of Separation of Church and State.

We as a nation have set our jaw against God. We are tempting Him to move us from judgment to destruction.

Our God is merciful. He is patiently sending us one wakeup call after another. He never pours out His wrath without warning.

I want to call our nation to prayer. Pray that our eyes will be opened. Pray that our hearts will be melted. Pray for a national revival. Pray, too, for the hearts of our leaders to be open to the significance of Israel in Bible prophecy.