Donald Wildmon, A Voice Crying for Decency (Part 1 of 4)

Let us behave properly as in the day, not in carousing and drunkenness, not in sexual promiscuity and sensuality, not in strife and jealousy. But put on the Lord Jesus Christ, and make no provision for the flesh in regard to its lusts. — Romans 13:13-14

I first became aware of Donald Wildmon’s ministry — the National Federation for Decency — in 1985 when he decided to confront the huge American company called the Southland Corporation. It was the home base of more than 7,500 7-Eleven convenience stores, and Donald Wildmon became incensed when he discovered that it was the nation’s largest retailer of pornographic magazines like Playboy and Penthouse.1

A Plea for Decency

The pressure continued throughout the year, and the Southland Corporation responded with silence, totally ignoring Wildmon’s pleas. But a victory did occur in April of 1984 when Jack Eckerd, the founder of Eckerd Drug Stores, announced he was taking the magazines out of his 1,000 outlets.2

Still, there was only silence from the Southland officials. So, in August of 1984, Wildmon called for people to form picket lines in front of 7-Eleven stores, and they did so in 168 cities. (Keep in mind this was long before you could rally people by way of the Internet.) In October, the picketing occurred again, this time at 600 stores across the nation.3

Southland continued to stonewall the movement — despite the fact that by the end of 1984, thousands of stores had ceased to sell the magazines (600 Super X drug stores, 400 Super America gas stations, 450 Albertsons food stores and hundreds of independently owned, franchised 7- Elevens).4

A March for Decency

Finally, Wildmon called for a “March Against Pornography” aimed at Southland’s corporate headquarters in Dallas, Texas. It was scheduled for Labor Day, 1985. Some 13,000 concerned citizens turned out.5 This was when I first became aware of Donald Wildmon and his ministry. My staff and I participated in that rally. We were dubbed, “evangelical terrorists” and “literary death squads” by Hugh Hefner, the publisher of Playboy.6

In April of 1986, the Southland Corporation finally capitulated and withdrew the magazines from their 4,500 corporately owned stores. This produced a chain reaction, as 5,000 more stores pulled the magazines in the following weeks, including 2,000 Revco drug stores and 1,400 Rite Aid “family” drug stores.7 During the ensuing months, Playboy’s circulation dropped over 650,000 copies per month.8 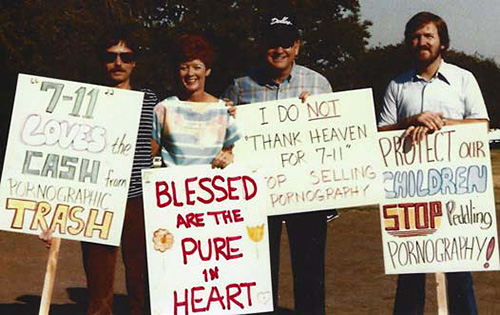 Dr. Reagan and his wife, Ann, together with two staff members, Gary Byers (on the left) and Mike Witte (on the right) participated in the march against the Southland Corporation in August 1985.

The Man Standing for Decency

Who was this powerhouse called Don Wildmon? He had already brought Sears to its knees because his monitoring of television programs had revealed that Sears was one of the leading sponsors of trash TV — programs containing the most sex, violence and profanity. It was against this massive corporation that he launched his very first boycott in 1978. And it had been successful.9 He was to become known as “the man the networks love to hate”10 and “the preacher who causes heartburn in Hollywood.”11

It seemed that a man with such enormous influence had to be a mega-church pastor or a well-known television personality. But no, before he established the National Federation for Decency in 1977, he had served for eight years as the pastor of a small United Methodist Church in Tupelo, Mississippi. During those years, it had grown from “a handful of people” to only 75 members. As Wildmon later put it, “I didn’t exactly set the world on fire in those eight years.”12

In 1976 Wildmon was moved by his bishop to a church in Southaven, Mississippi, a suburb of Memphis, Tennessee. At that point, he felt burned out. He had been an ordained minister for 20 years. He was “bored and felt constrained.” He had “lost the feeling God had something ‘special’ for me to do.” Putting it more graphically, he said he “felt like a monkey in a cage, going round and round and getting nowhere.”13

So Wildmon had no sterling record of accomplishment when God called him. But the Bible makes it clear that when God looks for a servant to anoint, outward appearances are unimportant to Him. His concern is the heart, as explained in 2 Chronicles 16:9 — “For the eyes of the LORD move to and fro throughout the earth that He may strongly support those whose heart is completely His…”

Don Wildmon was such a person. He was completely sold out to the Lord, and God had a plan for him that was beyond anything he could imagine.

In the second segment of this series on the prophetic voice of Donald Wildmon, we’ll go back to the beginning of God’s calling on Don’s life.

References are available under the original posting of this article on the Lamb & Lion Ministries website at christinprophecy.org.

Apostasy in the Church   Society   Testimony   United States of America