The Pope Gets It Wrong Again! 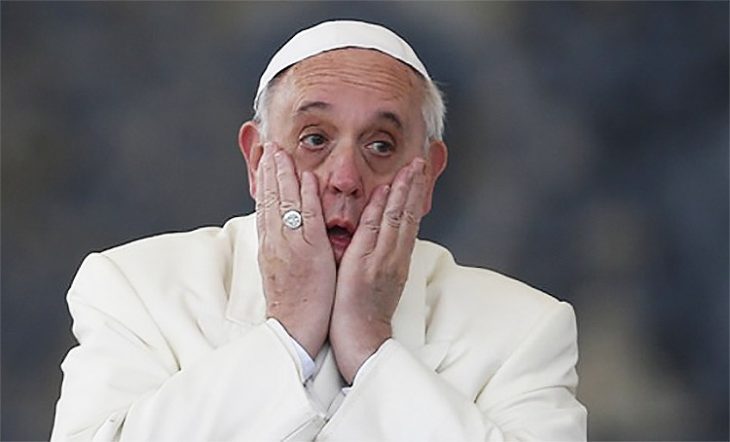 Ever since he was elected in 2013, Pope Francis has kept the Vatican working overtime calling press conferences to explain that he doesn’t really mean what he says.

Here are just a few examples of his off-the-wall statements:

The Pope’s latest unbiblical declaration occurred in August of this year (2018) when he declared that the death penalty is wrong in all cases. Unlike the above off-the-cuff remarks to reporters, this pronouncement was an official declaration that has resulted in a change in the Catholic catechism.

Until now the Catholic Church has always recognized capital punishment as a just penalty for severe crimes, particularly murder. In 1997, Pope John Paul II narrowed the standards to approve the death penalty if it is “the only practical way” to defend life.

Pope Francis’ new rule outlaws the death penalty totally. In announcing the decision, he claimed that capital punishment is “inadmissible” because it constitutes an attack on the “dignity of man.”

As usual, the Pope did not present any scriptural basis for his decision, although a year earlier he had made the comment that in his opinion, “the death penalty is contrary to the Gospel.”

The fact of the matter is that the Pope’s decision is thoroughly unbiblical. The sad thing is that most professing Christians are completely unaware of this.

Here’s the point. After the Noahic flood, God made a covenant with Noah that is recorded in Genesis 9:1-17. This is the covenant in which God promised that He would never again destroy the earth with water, and He gave the rainbow as a symbol of that promise. This was declared to be an “everlasting covenant” (Genesis 9:16).

There were other provisions of this very important covenant that are often overlooked:

The Noahic Covenant was a covenant with all Mankind, and, again, it was declared by God to be an “everlasting covenant” (Genesis 9:16).

The death penalty for murder was reaffirmed in the Mosaic Covenant that God made with Israel (Leviticus 24:17 and Numbers 35:30). And it was reconfirmed in the New Testament in Romans 13:1-7 where the Apostle Paul wrote in detail about civil government and the necessity of Christians to be in subjection to their governments. In verse 4, he pointed out that God has given civil government the right to “bear the sword” as “an avenger” of God “who brings wrath upon the one who practices evil.”

I think it is also important to note that the early Church recognized the continuing validity of the Noahic Covenant. When the leaders of the Church were faced with the issue of whether or not Gentile believers should be required to be circumcised, they decided against it, but they did decide that they were subject to the Noahic Covenant, and they, therefore, instructed them to refrain from eating blood (Acts 15:6-29).

So, Pope Francis has elevated his personal opinion above God’s Word. And the Bible presents grave warnings against those who do so (Revelation 22:18-19):

18) I testify to everyone who hears the words of the prophecy of this book: if anyone adds to them, God will add to him the plagues which are written in this book;

19) and if anyone takes away from the words of the book of this prophecy, God will take away his part from the tree of life and from the holy city, which are written in this book.

We are living in a prophesied time of gross apostasy when the Church (both Catholic and Protestant) desires to be accepted by the world, despite what the Word of God says.

David Reagan: We are living in a prophesied time of gross apostasy when the #Church desires to be accepted by the world, despite what the Word of God says. #Bible #DeathPenalty Click To Tweet
Apologetics   Apostasy in the Church   Church and Ecclesiology   Death   False Prophets   Interpretation of Scriptures