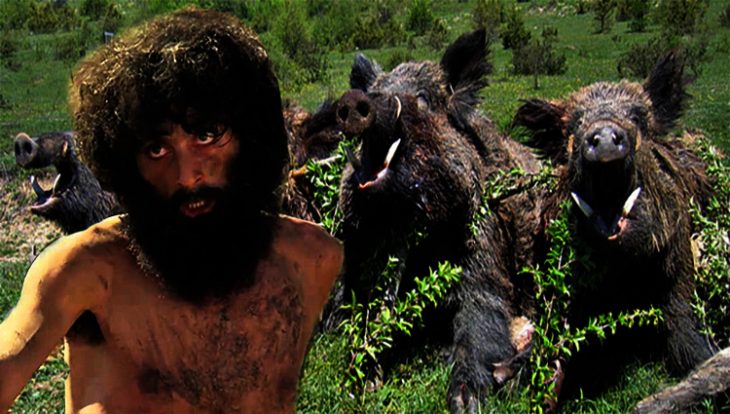 Doug Greenwold: We are approaching the gravel shore of the Sea of Galilee. It’s not sand. Let’s pick up from Part 1 as Luke 8:26 and on records.

“So they sailed over to the region of the Gerasenes, which is opposite Galilee. As Jesus stepped ashore a certain man from the town met him who was possessed by demons. For a long time this man had worn no clothes and had not lived in a house, but among the tombs. And when he saw Jesus, he cried out, fell down before Him, and shouted with a loud voice, ‘Leave me alone…’ [this is the demoniac inside this man] ‘…Jesus, Son of the Most High God! I beg you, do not torment me!’ For Jesus had started commanding…”

The demon recognized who Jesus was. James tells us that, of course, the demons recognize who Jesus is.

“For it had seized him many times, so that he would be bound with chains and shackles and kept under guard. But he would break the restraints and be driven by the demon into deserted places.”

Let’s leave that there for the moment and pick up with the corresponding account in Mark 5.

“So they came to the other side of the lake, to the region of the Gerasenes. Just as Jesus was getting out of the boat, a man with an unclean spirit from the tombs met him. He lived among the tombs, and no one could bind him anymore, not even with a chain. For his hands and feet were often bound with chains and shackles, but he had torn the chains apart and broken the shackles in pieces. No one was strong enough to subdue him. Every night and every day around the tombs and in the mountains, he would cry out and cut himself with stones.”

So, let’s go back to the boat. We’re rowing. We’re getting closer to shore. We hear the screeches. We realize he is naked. We see the tombs, and we’re panicked. Ritual impurity upon ritual impurity is just stacking up here. And, then, isn’t it interesting when you read this carefully where Luke says that Jesus gets out of the boat? I would suggest that all of the disciples stayed in the boat. None of them were going to get out of the boat and step foot in that cemetery. They were willing to follow Jesus, but sometimes doing so gets a little too messy. So, they were going to stay in the boat.

Interestingly enough, Jesus does not chide the disciples, fortunately. He doesn’t chide His disciples when they mess up, or stay in a boat. Thank you, Jesus, for that!

So, Jesus gets out of the boat. Now, freeze that thought, and let’s be the demoniac for a minute. You’ve been harassed. You’ve been despised. You’ve been ridiculed. You’ve been cursed for as long as you can remember. Now it’s say 2 o’clock in the morning, and you start to see multiple boats coming towards the shore. You say to yourself, “Now they’re coming at two in the morning to harass me. How bad can it get?”

Right. And then the boats reach the gravelly beach, if you will, and only one person gets out of the boat. I don’t know if whether the demoniac was standing 15 feet, or 20 feet, 25 feet away from the shore, but depending on the ambient light of the moon, the demoniac realizes the man’s got facial hair. It’s a Jew!

The possessed man might have thought, “Wow! What are Jews doing over here at two in the morning? What is going on?” It wouldn’t have taken the demoniac very long to figure out this Jew had come to contest for him.

Jesus Contends with the Demoniac

Doug Greenwold: Then Jesus asks for the name of the demon, who replies that his name is Legion. In a Roman legion, and the Roman Tenth Legion was occupying this land at the time, there’d be 4,800 troops. That’s not to say there are exactly 4,800 demons in the man, but the word signifies many. On the Richter scale of demonic possession, this man is off the charts. Jesus wasn’t contending with one demon, but thousands!

There’s this inner dialogue that takes place between the demons who immediately recognize who Jesus is. They don’t want to be sent back into the abyss. And, so, I want to suggest to you here that the Adversary, Satan, always has a backup plan. If Plan A didn’t work, which was the strong wind used to keep Jesus from coming on shore, well he’s got a backup Plan B. There’s this negotiation going on between Jesus and the demons, and the demons begged, “Can we go into those boars?” Jesus eventually says, “Yes.” Luke 8:32-33 tells us what happens next.

“Now a herd of many swine was feeding there on the mountain. So they begged Him that He would permit them to enter them. And He permitted them. Then the demons went out of the man and entered the swine, and the herd ran violently down the steep place into the lake and drowned.”

Let me tell you something about boars. They’re not really pigs, but that is how we Westerners are given the word here in order to understand it. Boars have very wide girths which give them tremendous buoyancy. Boars are actually really good swimmers. Jesus casts the demons into these boars, and instead of running away, they head for the sea. The fact that even one of them drowns would be kind of stunning, but that 2,000 of them drowned, well that’s utterly amazing. What happened? The demons killed the boars.

I’ve got a little comparison here. Across the Sea of Galilee, back where the Jewish people are, if a family has five sheep they are considered well off. If a family has along with other families in the clan 15 sheep, that’s a pretty good deal. If the whole village has a hundred sheep, that’s a fairly prosperous village. We’re talking now about 2,000 boars! This is an estimate, but the herd may constitute 25% of the agricultural gross national product of this whole region. Their deaths are a big, big deal.

The People React to Jesus

Doug Greenwold: Mark 5:14 and on continues telling the story.

“So the people went out to see what had happened, and they came to Jesus. They found the man from whom the demons had gone out, sitting at Jesus’ feet, clothed and in his right mind.”

Now this is really fascinating. To sit at the feet of Jesus is the posture of a disciple. That’s what disciples will do.

Also, the man had been naked, so where did he get the clothes? You think there are armoires of clothes in these caves waiting for this moment in time? Jesus wouldn’t have had enough clothes on Him to give any to the man. No, so another miracle had happened.

By this point in the story, the people of the region had been woken by all the noise of their herd drowning and would have begun to gather. Rather than rejoice in the incredible rescue of a demon-possessed man, they’re upset over the loss of their 2,000 boars. Materialism always trumps a human being.

The angry people wanted Jesus to just leave. Get out of Dodge! And, as fast as you can. They were also seized with a fear of Him.

Doug Greenwold: Picking it up in Luke 8:38, we encounter another facet of the story.

“The man from whom the demons had gone out begged to go with Jesus, but Jesus sent him away, saying, ‘Return to your home, and declare what God has done for you.’ So he went away, proclaiming throughout the whole city what Jesus had done for him.”

Interesting juxtaposition there as Jesus says, “You go tell them what God has done for you.” And, the man obeys. He goes and tells those people living in that pagan land exactly what Jesus did, because Jesus is God as far as he is concerned.

Let’s again be this ex-demoniac for just a minute here. Wouldn’t you want to stay with Jesus, stuck like a Siamese twin for the rest of your days to this man after what He has just done for you? Absolutely! It seems a little harsh for Jesus to order, “Stay here. And, by the way, let me give you an assignment. I want you to go tell your story. Go into the city there of 12,000-15,000 people and tell your story.”

Jesus often said to the Jewish people He’d cured not to tell their story, but He is in a different place there in the Decapolis. That’s why we always have to ask where Jesus is when He says what He says and does what He does.

Look at what happens as the result of the man sharing his testimony. When Jesus returns several months later, at the beginning of Mark 8, we read about Jesus feeding the 4,000. Thousands of pagans had heard of Jesus miraculously exorcising the demoniac, and so they came from all over the Decapolis to listen to this miracle maker.

As a fact, the ex-demoniac had become the very first missionary of the New Testament, and all he did was tell his story. And, the story is powerful.

Just look at the spiritual fruit from the ex-demoniac sharing his story. Some 4,000 people show up as a result of his testimony. Way to go Holy Spirit!

Doug Greenwold: So, what do we learn about God in this passage? Well, quite a bit actually.

For one, Christ’s heart beats for those people who society marginalizes as sub, sub, sub-human beings. He will do whatever it takes to rescue one person.

Two, we learn that with Jesus His timetable isn’t the disciples’ time table. Jesus says we’re going late in the afternoon, and they’re not ready.

Three, we also learn that disciples can’t manage God, as much as they might want to try.

Four, we learn that Jesus Christ has authority over the Adversary, and just one word is sufficient to defeat him.

Five, we learn that Jesus’ time-frame is not our time-frame.

And, six, no one can stay Christ’s hand.

Isn’t this story of Jesus healing the demoniac a remarkable story, especially when you understand the context? To top it off, this healing is what happened in the first 12 hours, but then during the following 12 hours, Jesus will go back and bring Jairus’ daughter back to life and deal with the woman who has the issue with bleeding. What a remarkable 24-hour window of time for Jesus!