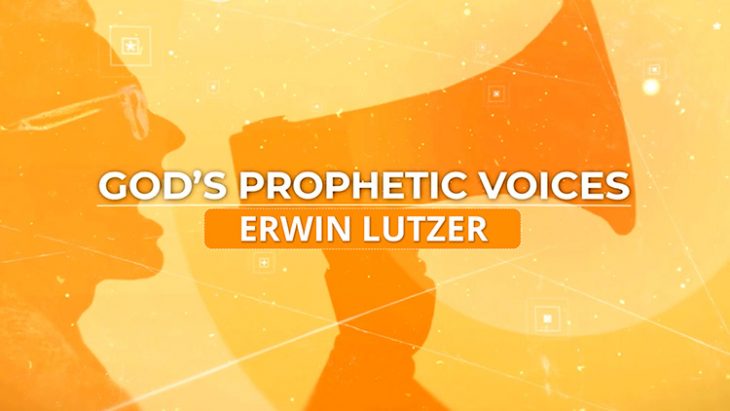 Tim Moore: Our nation at one time understood the way. In your latest book, We Will Not be Silenced, you cite John Adams who wrote, “Our Constitution was made only for a moral and religious people,” by which he meant people living according to what we would call a Christian worldview. Whether they were Christian or not, the people still lived according to that worldview. Then you continue, “It is wholly inadequate to the government of any other.” You also quote D.H. Lawrence who said, “Men fight for liberty and win it with hard knocks, their children brought up easy let it slip away, poor fools, and their grandchildren are once more slaves.” How close are we to that final stage of becoming enslaved again to this Leftist ideology or to a government run amuck?

Erwin Lutzer: It’s very scary when you realize how many Millennials believe that we should not have freedom of speech. When you stop to think about what is happening in our society, when we have de-platforming, which of course for many of us was a new word. And, we have collective demonization. This tactic was perfected in the Soviet Union. Once the state demonized someone, everyone else chimed in. They wanted to prove that they were on the “right side of history.” Think back to Nazi Germany. There were churches that put up swastikas in their churches and on their doors, because what they were saying is, “When you come for the Christians, don’t come for us, because we are on your side.”

I would like to quote the words of Winston Churchill who said, “An appeaser is someone who feeds the alligator with the hope that the alligator will eat him last.” So, you have all of these people appeasing one another to make sure that they are so woke that they can be seen as virtuous.

Tim Moore: Sadly, many of those who are trying to be woke are not woke enough, and so the alligator is already consuming its own, which always happens in a revolution. We here at Lamb & Lion Ministries for many years has been comparing the modern-day church to the church of Laodicea, about which Jesus said: “I know your deeds, that you are neither cold nor hot. And because you say, ‘I am rich and have become wealthy and have need of nothing, and you do not know that you are wretched and poor and blind and naked'” (Rev. 3:14-22).

You make a strong case that the Church today actually harkens back to the church in Sardis, of which Jesus said: “You have a name that you are alive, but you are dead. Wake up! And strengthen that which remains which the things that were about to die” (Rev. 3:1-6). I appreciate the case you make with that passage.

Erwin Lutzer: I want to back up to the church in Laodicea for just a moment. You’ll notice that its problem was not that it was blind and deaf and so forth, rather its problem was that it didn’t know it was poor, wretched, miserable, and blind. They thought they were doing very well, thank you very much. But, Jesus as a consultant had a very different opinion.

Now, a word about the church at Sardis. Jesus urged the church to strengthen what remains. He says, “You have a reputation for being alive but actually you are dead.” But, here is the challenge I want to leave with people today — as you go through the letter, Jesus asks the church to repent. But, then He notes, “But there are still a few names in Sardis who have not soiled their garments and they shall walk with Me in light, for they are worthy.” And so, I say, even if your church isn’t all that it should be, certainly the church in Sardis wasn’t. There are those within our churches who are very attentive to their spiritual walk. They desire to be faithful, and Jesus takes note of them. So, I encourage people to join among those who are going to walk with Jesus Christ all dressed in white.

Tim Moore: You made a point that didn’t dawn on me until you just said what you did, that unless we recognize our utter hopelessness, the Gospel does not appeal. In other words, unless I recognize that I am a sinner and have no merit for God’s grace and love, until I realize that, then the offer of salvation is meaningless. Too often today we the Church tend to tell people that they can have their best life now without making them aware of their blindness and wretchedness, before the eyes of a holy God, and then introducing them to the Gospel of Jesus Christ.

Erwin Lutzer: People are not naturally attracted to the Gospel, because we are born self-righteous. We are born covering over our sins. That’s where preaching the Gospel of Jesus Christ comes in, because our preaching and our sharing of the Gospel creates a need within them that they don’t even know they have — Jesus Christ is the answer! So, we ask ourselves, “Do we meet their felt needs?” Absolutely! When standing in the presence of God, they are going to realize that their greatest felt need is for the righteousness of Jesus Christ. So, we have to help them to see that, and that is where sharing the Good News of the Gospel comes in.

Tim Moore: For Christians, one of the reasons why we love sharing the prophetic Word is so that people can be inspired in the same way that the disciples were on the road to Emmaus once the prophetic Word pointing to Jesus Christ was revealed to them by the Lord Himself as He walked along with them. They said, “Didn’t our hearts burn within us to understand what God had revealed, pointing to Jesus Christ” (Lk. 24:32).

We may be focusing on America, but really, Christians dwell in every country and on every continent. Oftentimes they live under even harder circumstances and still advocate for truth. One of the challenges today deals with the Christian liberty that you spoke about earlier. We should not relegate Christian religious liberty to just going by the wayside, rather, we do need to advocate. Whether or not Christians are allowed to speak by the government officials, as Peter and the other apostles testified — we must obey God rather than men.

Erwin Lutzer: Throughout Church history, Christians have always learned the lesson that there are consequences to being obedient to Christ. We in America need to learn that. We’ve always had a government that has been favorable to Christianity. But, as that begins to change, the question is this: “Will we be willing to take the cross of Jesus Christ into the world, the cross that is an offense to unbelievers? Will we consider persecution, alienation, and even de-platforming as a badge of honor in the midst of a nation that has lost its way?”

Tim Moore: I always try to end on a hopeful note, even though this has been a very challenging topic. I do encourage all Christians to get a copy of Pastor Lutzer’s book, We Will Not be Silenced, because you will be challenged to be a person who stands up for truth in your congregation, in your home, and in your community.

Let’s go back for just a moment to a shocking way to affirm that very hope that is within us. You echoed the utterly Christian sentiment that is attributed to Swiss Reformation leader, Huldrych Zwingli, who said, “For God’s sake do something courageous.” But, you also related a very clarifying mission presented to you as a pastor, when someone said, “Your responsibility is to teach your people to die as martyrs for the faith.” Tell us how that can be a hope-filled statement?

Erwin Lutzer: Let me put that statement in context, okay. I attended a meeting where a man who was converted out of Islam, a scholar, gave a lecture on what Sharia Law really was. After the lecture, we happened to meet in a dining room, and I offered, “Let’s have coffee together.” So, we were talking about what can we do and so forth, and that’s when he took his finger and poked it right into my chest and said, “God is calling you to teach people how to die for the faith!”

Let us remind ourselves that when we look at Church history, it is not necessary for us to have freedom in order to be faithful. Just ask the martyrs. They will let you know that you can be faithful in the midst of a culture that is antagonistic towards Christ while living in the midst of a culture where there is no religious freedom. We have some very good news, and that is the words of Jesus Christ, “Lo, I am with you always, even to the end of the age” (Mat. 28:20). So, carry on!

In 1912, a Scottish pastor named John Harper was invited to lead a revival at the Moody Church. He set sail for America aboard the brand-new ship, Titanic. When the immense ship struck an iceberg in the North Atlantic, Harper ensured that his 6-year old daughter Nana and niece Jessica were on board a lifeboat, and then he began earnestly sharing the Gospel with men he knew would not survive the night. Even as he floated in the frigid sea, he preached Jesus Christ. One survivor later testified:

“I was a careless sinner when the Titanic went down. Pastor Harper called out to me, ‘Is your soul saved?’ and I replied, ‘No, it is not.’ He responded, ‘Believe on the Lord Jesus Christ and thou shalt be saved.” We drifted apart and back together several times, and each time he cried out, ‘Is your soul saved? Believe on the Lord Jesus Christ and your soul shall be saved.’ Watching others sink beneath the waters to eternity, in my desperation I cried to Christ to save me. I believed and was saved.”

Are you that dedicated to crying out in order to share Christ with those facing eternal doom?

I pray that you will not be silenced, but will sound the alarm as watchmen, even as we remain watchful for our soon-returning King, Christ Jesus, Himself.

Tim Moore: I really enjoyed spending time with Pastor Erwin Lutzer in Chicago, Illinois. His recent book We Will Not be Silenced is a clarion call for Christians to contend earnestly for the faith once delivered to the saints to serve as “salt and light” within our culture.