The Double-Edged Sword: How Technology is Keeping the Biblical Worldview from a New Generation 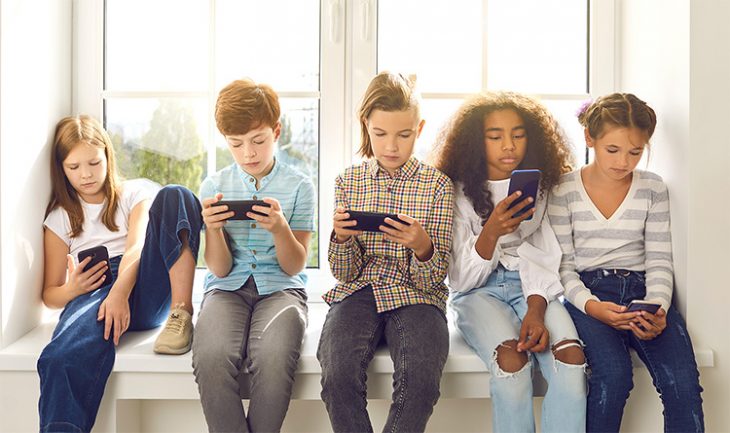 Our society faces an existential crisis of epic proportions. And I’m not talking about rocket-high inflation, D.C. swamp corruption, discordant political division, or even threatening environmental concerns. While these crises all hold their rightful place in the pantheon of hazards, what we are truly confronting is the seismic collapse of the biblical worldview here in the West.

What’s been the proverbial poisoned arrow to the Achilles’ heel of our society? Humanism is the poison, technology is the arrow, and our Achilles’ heel is the hearts and minds of our newest generation. We now reside in an age almost utterly devoid of the fundamental teachings of the Bible and the biblical worldview, and we are reaping the whirlwind for it. Watch the societal chaos raging across your news feeds, and you will undoubtedly agree.

One Side of The Sword

You may be thinking, “The Humanism I can understand, but I’m not quite following you about the technology. Maybe you have some kind of grudge against technology?”

No, I assure you, I do not hate technology. Quite the contrary, I love it! After all, isn’t technology just applying what we know to fix problems and make stuff? Technology can be thought of as the gadgets and devices we make, but it also includes the technical skills and creativity it initially takes to invent and forge these tools.

I have dedicated the last 25 years of my life to utilizing different technologies to reach people with the Gospel of Jesus Christ. The communications technologies that the Lord has provided His Church today have reached far more people for Jesus Christ than in any era before Itek’s Richard Leghorn coined the term “The Information Age” back in 1960. Praise God!

The Other Side of The Sword

But, and you must realize this — technology is a double-edged sword. Technology greatly benefits both individuals and society, but in the wrong hands, it can produce great harm. The lord of all evil — Satan — knows this. He’s been steadily following his sinister plan for thousands of years to be a corrupting influence on humanity, and it continues to this day. The only difference between then and now is that Satan utilizes technology in his insidious mission to send as many people to Hell as he can before he himself is at last cast into the Lake of Fire.

Satan’s primary purpose for technology is to create distraction. And, it has been working in spades.

No other generation in the past has been subjected to as many distractions as the Millennials and Gen-Zs of today. Gen-Zs, in particular, have lived their entire lives never having known what life was like without being connected 24/7 to the Internet. This characteristic has led Jean Twenge, a professor of psychology at San Diego State University, to label Millennials and Gen-Zs as Generation Me and iGen, respectively.1 And, after columnist Victoria Barret reviewed two studies about classroom attention spans, she subsequently labeled the children of today as the Distracted Generation.2

A great price has been paid psychologically for these endless distractions. Barret cites a Pew Research Center finding where nearly 90% of teachers surveyed said that digital technologies created “an easily distracted generation with short attention spans.”3 In a Common Sense study, 71% of teachers surveyed said they thought technology was hurting attention spans somewhat or a lot, with 60% concluding that online distractions hindered their students’ ability to write and communicate in person.4

Though ever-connected to their “friends” over social media, losing in-person human relationships has caused Gen-Zs to find themselves increasingly homebound, jobless, dislocated, lonely, lethargic, physically weakened, depressed, and addicted to prescription pain killers. They are 35% more likely to commit suicide than previous less-technical generations. Twenge notes with some worry that “it’s not an exaggeration to describe iGen as being on the brink of the worst mental-health crisis in decades.”5

This abruptly-negative shift in teen behaviors towards troubled emotional states is not a Western problem either but has become a global cultural phenomenon. Twenge identifies the extent of the problem: “These changes have affected young people in every corner of the nation and in every type of household. The trends appear among teens poor and rich; of every ethnic background; in cities, suburbs, and small towns.”6

Computers are everywhere now. Smart devices are all the rage, and now people wear their computers on their bodies in the form of smartphones and watches. Billions of people have scrambled to purchase electronic devices, filling their houses and their lives with portable technology. Statista reports that the average person owns 6.58 computer devices, adding up to nearly 50 billion devices operating worldwide.7

Over 4.54 billion of the 7.77 billion people in the world are connected by the Internet.8 The average Internet user spends 6.5 hours online every day, generating 88,555 gigabytes of Internet traffic every second!9 The average person will spend nearly 4 hours each day on their devices, dedicating 90% of that time engrossed with any of the 5-plus million apps.10

Indeed, the Internet has developed into today’s Tower of Babel. Language barriers are even becoming a thing of the past as translation apps turn one’s smartphone into a Star Trek-like universal translator. The networks are getting faster and more robust as fifth-generation (5G) technology is being implemented at record speed to keep up with the exabytes of data being shared. And the Internet continues to expand into its third phase, seeking to encompass every device into the Internet of Things. Alphabet, the parent company which owns Google, has risen to become a monopoly, channeling 92% of Web searches and 44% of all emails generated, and it now decides who sees what information.11 Cries of Internet censorship, especially against Christian and Conservative viewpoints, are on the rise. He who controls information controls the world.12

In today’s world of advanced technology and high-speed communication, many technologies drive visual learners to on-demand and streaming video. As technologist John Dyer points out, “Technology has become a kind of supra-cultural phenomenon that finds its way into every aspect of our diverse lives.”13

Author Craig Loscalzo notes that digital media is perfect for engaging with the mosaic style of thinking used by the Post-Modernist, meaning they draw conclusions from seeing the parts rather than seeing the whole because they are a “sound-bite driven culture” who have neither endurance nor lengthy attention spans.14 A staggering 90% of U.S. Internet users ages 18 to 44 years watch YouTube and TikTok.15

The $100 billion global gaming industry has also taken the world by storm. Gamers play an average of seven hours each week, but that has been increasing by 20-25% every year.16 The global gaming community transcends national borders, living within virtual worlds, sharing common experiences, and speaking in a common vernacular.

Social media has added an average of 2 hours and 24 minutes per day spent multi-networking across an average of 8 social networks.17 Active social media users, primarily female, have passed the 3.8 billion mark on a plethora of popular platforms.18 Social media has become the primary means of communication among youth, even preferred alarmingly over in-person conversation.

What characterizes today’s brave new culture? Media expert Steve Turner would describe it as “pop-culture” and notes just how vastly it suffuses just about every part of the lives of everyone everywhere.19 He warns that the driving spiritual forces behind much of pop culture are intent on altering the perceptions of the outgoing culture, often negatively towards God, the Bible, and Christianity. The result has been the transition of our society away from historical Modernist logic-based thinking to a Post-Modernist relativistic feelings-based post-Christian era.

Evangelism expert Rick Richardson describes the characteristics of this Post-Modern culture as including a common belief that people are their own gods, often engage in identity politics, are rampantly distrustful of authority, and hold a general belief that love rules. They have an overt fear of “the Patriarchy” and readily discard whatever came before, tending to view Christians as self-serving.20 This is Satan’s new ethos, carefully indoctrinating the masses worldwide into Humanism via their ever-present and ever-watching technologies, thus creating a new global culture devoid of any biblical foundation.

Pro-Humanist, anti-Christian, “having a form of godliness but denying its power” — the end of days culture Paul warned Timothy about has, at last, arrived (2 Timothy 3:1- 9). These deniers of the one true God, Paul promises, folly will be made manifest to all.

But, you Christian, know the Holy Scriptures that make you wise for salvation through faith in Christ Jesus. Flip that sword of technology and use it instead to reach our lost generation with the Gospel of Jesus Christ. Do so, and you will change the world.