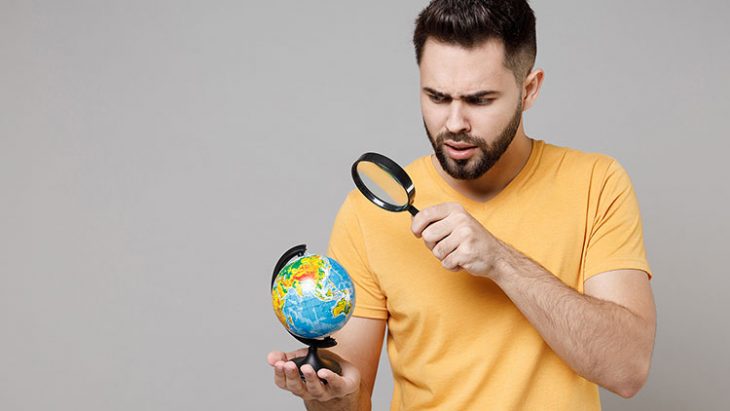 Harvard University celebrated its pagan worldview this year by inviting Jacinda Ardern to deliver the school’s commencement address. She is the Prime Minister of New Zealand. As one observer put it, her speech sounded like “a homily advancing the doctrinal ideology of religious secularism.”1 She glowingly bragged about her parliament and its legislative accomplishments:2

We have a mixed member proportional system which means… it’s ensured our parliament better reflects our communities. Almost 50 percent of our parliament are women [applause], 20 percent Maori, the indigenous people of New Zealand, and our Deputy Prime Minister is a proud gay man [huge cheers] and sits among several other rainbow parliamentarians [applause].

In the past ten years, we have passed laws that include everything from the introduction of gay marriage [joyous cheers] and the banning of conversion therapy [applause], right through to embedding a 1.5-degree climate change target into law [applause], banning military-style semi-automatics and assault rifles [applause], and the decriminalization of abortion [ecstatic ovation].

The occasion reminded me of the commencement speech that the great Russian novelist, Alexander Solzhenitsyn, delivered at Harvard in June of 1978. His reception was quite different from that of New Zealand’s Prime Minister. Like her, he arrived on campus a hero; but unlike her, he departed a pariah.

That’s because what he had to say outraged the Harvard intelligentsia, some of whom actually booed him. The New York Times even went so far as to declare him a “dangerous zealot.”3 Other critics denounced him as a “Tsarist reactionary, an Orthodox Christian ayatollah, a hater of democracy and a Russian ultranationalist.”4 As one of his biographers, Daniel J. H. Mahoney, has put it: “Solzhenitsyn wasn’t just dismissed; he was demonized.”5

What did Solzhenitsyn do to provoke so much anger? The answer is simple. He spoke from a Christian worldview, denouncing the increasing degradation of American society in politics, business, journalism, art and religion. In the process, he chastised the Harvard religion of Humanism because, as he put it, “Humanism always leads to Materialism, and Materialism produces “moral poverty.”6

This observation brought Solzhenitsyn to his concluding and defining statement: “On the way from the Renaissance to our days… we have lost the concept of a Supreme Complete Entity which used to restrain our passions and our irresponsibility.”7

Solzhenitsyn developed his Harvard thesis more fully and bluntly five years later in 1983 when he received the Templeton Prize for his “exceptional contribution to affirming life’s spiritual dimension.”8 His acceptance speech was titled, “Godlessness: The First Step Toward the Gulag” (The gulag being the system of Soviet forced labor camps). He began with a reminiscence from his childhood:9

More than half a century ago, while I was still a child, I recall hearing a number of older people offer the following explanation for the great disasters that had befallen Russia: Men have forgotten God; that’s why all this has happened.

Another problem he identified was the refusal of people to realize the evil that is in the individual human heart and the consequent unwillingness to declare anything as good or evil. The result, he declared, is that the West “is ineluctably slipping toward the abyss.”10

Solzhenitsyn emphasized that we in the West must come to the realization “that human salvation can be found neither in the profusion of material goods nor in merely making money.” Rather, the aim should be “the quest of worthy spiritual growth.” He then asserted that Mankind’s hope can be found only by re-directing our consciousness “in repentance to the Creator of all; without this, no exit will be illumined, and we shall seek it in vain.”11

Putting the same thought in different words, Solzhenitsyn concluded his remarks by urging his listeners to engage in “a determined quest for the warm hand of God, which we have so rashly and self-confidently spurned.”12

From Christianity to Humanism

Our Nation came into being based on a Christian worldview. That is the viewpoint of the Declaration of Independence and our Nation’s Constitution. The Christian worldview served throughout the 19th Century and the first half of the 20th as the glue that held our society together.

That agreement began to fall apart during the second half of the 20th Century, resulting in an ever-increasing virulent culture war. By the time the century came to an end, the Humanist worldview had triumphed, resulting in tensions so extreme that they menace the future existence of our nation.

So, what is a worldview? The term actually defines itself. It is how a person philosophically views the world. Consider the differences in the competing worldviews in America today that are illustrated in the chart below.

What is your worldview? Are you focused on Jesus and serving Him? Are you standing for the truth of God’s Word, or have you gotten in bed with the world and become a Christian in name only? Have you fallen in love with the world and forgotten that you are supposed to be distinct from the world? 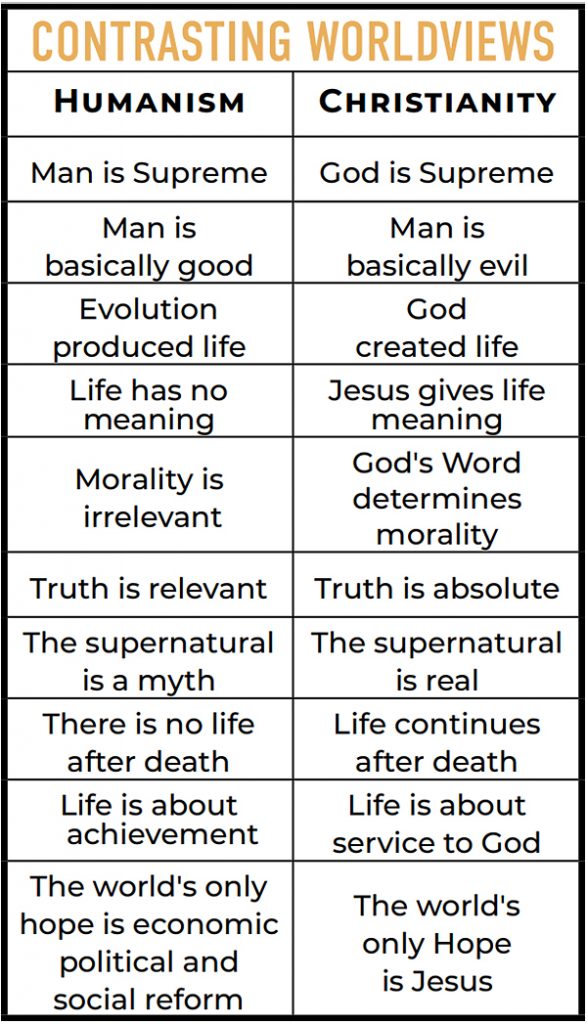 There’s an old Negro spiritual song that always challenges me to examine my attitude toward the world. The first verse goes as follows:14

This world is not my home, I’m just a passing through. My treasures are laid up Somewhere beyond the blue. The angels beckon me From heaven’s open door, And I can’t feel at home In this world anymore.

Do those words express your feeling about this world? What word would you use to summarize your feeling? Zealous? Anxious? Enamored? Estranged? Are you comfortable or do you feel ill at ease?

Jesus said, “…he who hates his life in this world shall keep it to life eternal” (John 12:25) . The apostle Paul gave a very similar strong warning about getting comfortable with the world. In Romans 12:2 he wrote: “Do not be conformed to this world, but be transformed by the renewing of your mind.” How do you measure up to this exhortation?

Are you a friend of the world? Are you comfortable with what the world has to offer in music, movies, television programs, and best-selling books? Friendship with the world is hostility toward God!

If you are to survive the perilous end-times in which we are living, you must commit yourself to living with an eternal perspective.

What does that mean? In the words of Peter, it means living as “aliens and strangers” in this world (1 Peter 2:11). Similarly, in the words of the writer of Hebrews, it means living as “strangers and exiles.” (Hebrews 11:13). Paul put it this way: “Do not set your minds on earthly things, for our citizenship is in heaven” (Philippians 3:19-20). Paul explained why he felt that way: “For I consider that the sufferings of this present time are not worthy to be compared with the glory that is to be revealed to us (Romans 8:18). Keep in mind those are the words of a man who was taken to Heaven and personally experienced its glories (2 Corinthians 12:1-4).

The great Christian writer, C. S. Lewis, explained that to live with an eternal perspective means “living as commandos operating behind the enemy lines, preparing the way for the coming of the Commander-in-Chief.”15 Maranatha! (1 Corinthians 16:22).

1) David Lane, “Our Judeo-Christian Heritage Squandered: Is It Any Wonder Judgment Is Upon America?” CharismaNews, June 7, 2022, www.charismanews.com/opinion/renewing-america/89366-our-judeo-christian-heritage-squandered-is-it-any-wonder-judgment-is-upon-america, page 1.

14) Hymnary.org, “This World is Not My Home,” https://hymnary.org/text/this_world_is_not_my_home_im_just_a?extended=true.

15) The author was unable to locate the precise source of this quotation that is attributed to C. S. Lewis. Lewis refers several times to “living on enemy territory” in his classic, Mere Christianity, (New York, New York: MacMillan Publishing Co., 1960), page 51.