To help identify the most complex of all the creatures that defy Evolution, I went to Dr. Jobe Martin, former dentist, professor and Evolutionist. Having clearly seen God’s eternal power and divine nature from what has been made (Rom. 1:20), Dr. Martin came to faith in Jesus Christ and a trust in the biblical account of the six days of Creation. He and his wife Jenna Dee have since formed Biblical Discipleship Ministries based in Rockwall, Texas to teach on campuses, classrooms and churches that we can trust the Bible’s account of the Creation and Jesus as Savior.

We’d have to talk about the human body as the most complex of all creatures.

Let’s talk just about the eye for a moment. Even Darwin recognized how fantastic the human eye is. Darwin once said, “To suppose that the eye with all of its inimitable contrivances for adjusting the focus for different distances, for admitting different amounts of light and for the correction of spherical and chromatic aberration, could have been formed by natural selection, seems, I freely confess, absurd in the highest degree.”

What else can you say about that? It is. I mean, the way the eye takes in the light. Even today we can’t make binoculars or glasses that can duplicate what our eyes can do. We can be focused up, focused long, focused short. 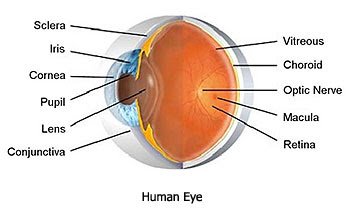 Eyes are designed so that even though we have two eyes we can only look at one thing at a time, and it is a small amount that you can really focus on. Everything else is out of focus sort of, in the sense that everything you look at is in exactly the same focus, such as when you are reading a page and all of the words would be right in front of you. So, we have to be able to focus on everything we see that way.

When we walk you balance out the horizon with your eyes. God made two special muscles that function involuntarily. As you walk your horizon stays the same out there, because when you turn your head the horizon does not wobble because the eyes are adjusting to this naturally as you walk. These kind of automatic things are built into everything — ears, eyes, nose, mouth, teeth — everything that God made.

The human body does something else amazing. When you get a cut, it keeps you from bleeding to death by clotting. Why doesn’t your blood clot inside your body? It only clots when you cut, and here you go — a natural Band-Aid. If you have some pathological condition that clots your blood internally, you’ve got problems. But, that doesn’t really happen. Think of all the billions of people and how many on any given day would have a clot in the wrong place if that were the case. We’d all be dead!

In your book called The Evolution of a Creationist you wrote about the Anthropic Principle. What is that?

When you just look at the constants in nature, there is no room for error in there. That this is just an amazing series of circumstances of coincidences, or that it took billions and billions of accidents all working together to work, or some explosion caused everything to work out absolutely perfectly to create and sustain life — that doesn’t even make sense to me. It used to, but it doesn’t anymore.