Until the mid-19th Century, the biblical account of the creation of life and the universe was widely accepted within Christendom. In other words, Christians accepted the biblical revelation that the material world was created in six literal days about 6,000 years ago.

But when Darwinism exploded on the scene, Christian leaders sold out quickly to the theories of scientists that the universe is billions of years old. To accommodate that supposition, Christian theologians developed the Gap Theory and the Day-Age Theory. The Gap Theory argued that there are billions of years between the first two verses of Genesis. In other words, God created the universe and then it was despoiled by the revolt of Satan, and billions of years later, God re-created the universe. The Day-Age Theory postulates that the creation days of Genesis were really days that lasted millions, if not billions, of years each. 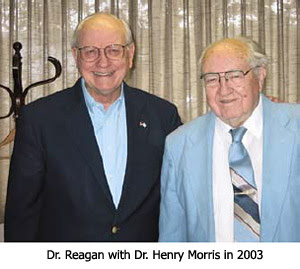 In 1961 Dr. Morris teamed up with a theologian named John C. Whitcomb, and the two of them wrote The Genesis Flood, which advocated supernatural creation by God and attributed the fossil record to the Noahic Flood.

In 1963 Morris and nine others founded the Creation Research Society which was committed to reaffirming the biblical story of creation. In 1972 he established the Institute for Creation Research which produces scientific studies that affirm a young earth and refute the Theory of Evolution.

In recent years, many other Creation ministries have been established and the number of scientists speaking out against evolution and in behalf of a young earth has steadily increased.

The time is long overdue for Christian leaders to join that chorus of voices. Unfortunately, most of those leaders today are either silent about Creation, or else they continue to try to conform the biblical revelation about the Creation to the opinions of scientists.

I spoke out strongly in behalf of the biblical revelation that the Creation took place 6,000 years ago in six literal days. The article was titled, “The Beginning and The Ending.”

The purpose of my January-February 2012 Lamplighter magazine is to emphasize the fact that a belief in the biblical story of Creation is not something limited to a few “Fundamentalist preachers.” Rather, the concept of a young earth (together with a refutation of evolution) has been embraced by many with advanced degrees in science.

The author of our lead article, Dr. James Hugg, came to believe in Creationism through his study of science. He concluded that special, supernatural creation and a worldwide flood were the best scientific explanations of what could be observed on earth and in the heavens.

In my opinion, the Theory of Evolution and its assumption of a Creation that is billions of years old is the greatest fantasy ever conceived by the depraved mind of Mankind.