Living with an Eternal Perspective: My Attitude About the World 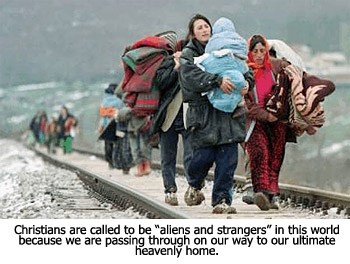 Let me ask your indulgence for a moment as I share my personal feeling about this world. The word I would use is “hate.” Yes, I hate this world. I hate it with a passion so strong and so intense that I find it difficult to express in words.

Now, let me hasten to clarify my feeling by stating that I do not hate God’s beautiful and marvelous creation. I have been privileged to see the majesty of the Alps. I have been awed by the rugged beauty of Alaska. I never cease to be amazed by the creative wonders of God in the great American Southwest. I have been blessed to see the incredible beauty of Cape Town, South Africa. And I have been overwhelmed time and time again by the stark and almost mystical bareness of the Judean Wilderness in Israel.

When I say that I “hate” this world, I’m not speaking of God’s creation. I’m speaking, instead, of the evil world system that we live in. Let me give you some examples of what I’m talking about:

I hope you understand now what I mean when I say, “I hate this world!”

But how I personally feel about this world is not important. The crucial point for you to consider is the biblical view. Let’s look at it, and as we do so, compare the biblical view with your own.

Let’s begin with the viewpoint that Jesus told us we should have. It is recorded in John 12:25 — “He who loves his life loses it, and he who hates his life in this world shall keep it to life eternal.”

Those are strong words. They are the kind that cause us to wince and think, “Surely He did not mean what He said.” But the context indicates that Jesus meant exactly what He said. So, what about it? Do you hate your life in this world or do you love it?

The Viewpoint of the Apostles

The apostle Paul gave a very strong warning about getting comfortable with the world. In Romans 12:2 he wrote: “Do not be conformed to this world, but be transformed by the renewing of your mind.” How do you measure up to this exhortation?

Are you a friend of the world? Are you comfortable with what the world has to offer in music, movies, television programs and best selling books? Friendship with the world is hostility toward God!

The Focus of Your Mind

Paul tells us how to guard against becoming comfortable with the world. In Colossians 3:2 he says, “Set your mind on the things above, not on the things that are on earth.” In Philippians 4:8 he expresses the same admonition in these words:

As these verses indicate, one of the keys to living a triumphant life in Christ — to living a joyous and victorious life in the midst of a world wallowing in despair — is to live with a conscious eternal perspective.

The great Christian writer, C. S. Lewis, explained that to live with an eternal perspective means “living as commandos operating behind the enemy lines, preparing the way for the coming of the Commander-in-Chief.”5

In the fourth part of this series on living with an eternal perspective, we will look at the biblical example of Asaph.

5) The author was unable to locate the precise source of this quotation that is attributed to C. S. Lewis. Lewis refers several times to “living on enemy territory” in his classic, Mere Christianity, (New York, New York: MacMillan Publishing Co., 1960), p. 51.