Living with an Eternal Perspective: The Biblical Example of Asaph 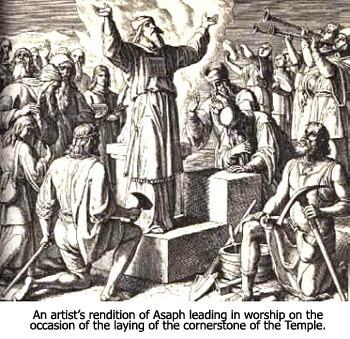 There is a powerful biblical example of what can happen when a believer gets his eyes off the Lord and starts focusing on transient things rather than eternal matters. It is found in Psalm 73.

All students of the Bible are familiar with Psalm 51 in which David confessed his sin of adultery with Bathsheba. But few seem to be aware of Psalm 73 which contains the confession of David’s worship leader, Asaph.

In this remarkable psalm, Asaph confesses that he almost lost his faith when he lost his eternal perspective. It happened when he did something that all of us tend to do from time to time — namely, he took his eyes off the Lord and put them instead on the wicked. When he did so, he noticed the prosperity of the wicked and began to wonder if his devotion to God was really worth the effort (Psalm 73:1-3).

Has that ever happened to you? Surely it has. I think it has happened to all of us from time to time.

Struggling with the Prosperity of the Wicked

It’s the end of the month, and the bills are due. You’re sitting at your desk writing check after check. Suddenly, you reach that minimum balance you must maintain in order to pay the daily bills of the new month — food, gasoline, clothing, repairs, etc. But you still have a stack of bills to pay! You sigh in exasperation, wondering when you will ever be able to catch up with what you owe.

As you sit there staring dejectedly at your meager balance, you begin to think about a friend of yours at work. He is a vain and profane man, with a mouth like a sewer. He could care less about God. He is unfaithful to his wife. He ignores his children. He is consumed with sports and gambles constantly. Yet, he never seems to have a worry. He lives in a beautiful house, drives a fancy car, and eats at the finest restaurants.

Your heart begins to fill with envy and anger. You feel like crying out, “Lord, I serve You faithfully, and all I ever seem to get in return is trouble. My colleague at work is a complete reprobate, and he doesn’t seem to have a worry in the world! What’s wrong? Am I spinning my wheels with You? Is my tithe a waste of my money? Is my faithfulness of no concern to You? The way things are going, I might as well serve the devil and get some enjoyment out of life!”

Sound familiar? Well, this is exactly what happened to Asaph. He lost his eternal perspective, got his eyes on the wicked, and started wallowing in self-pity (Psalm 73:2-3).

It’s amazing how irrational we become when we allow self-pity to take over our thinking. When it happened to Asaph, he started fantasizing about the rich. He began to tell himself that they are “always at ease,” always increasing in wealth, never facing the problems of other people (Psalm 73:4- 5,12). All of which, of course, is utter nonsense. In fact, the opposite is true. The rich often tend to have far more problems than other people. For one thing, they must constantly be concerned about their money — how to protect it and multiply it.

It was while Asaph was caught up in this fantasy world that he committed a grievous sin against God. He blasphemed the love and faithfulness of God by exclaiming: “Surely in vain I have kept my heart pure and washed my hands in innocence; for I have been stricken all day long and chastened every morning” (Psalm 73:13-14).

Asaph was literally on the verge of losing his faith. His spirit was in turmoil. He was wrestling with monstrous doubt. The wrestling match continued until… “Until I came into the sanctuary of God; then I perceived their end [the end of the wicked]” (Psalm 73:17).

Asaph is maddeningly vague at this point. He does not tell us what happened to him when he went to the Lord’s house, except that his eternal perspective was restored. Was it a song that touched his heart? Could it have been a scripture reading or a sermon? Perhaps it was a word of encouragement from a discerning friend. It might even have been a death in his family. We just don’t know. All we know for sure is that something touched his heart and reminded him of the eternal destiny of the wicked.

He states that he was reminded that the wicked walk in “slippery places” and that God may cause them to be cast down at any moment, being swept away by “sudden terror” (Psalm 73:18-19). In other words, Asaph was reminded that life is very tentative — here one moment and gone the next.

The Impact of Death

I think this is the reason that the death of Princess Diana had such an enormous impact on the world. Here was a woman who had it all — everything the world dreams of having. She had beauty, charm, wealth, fame, and influence. She had the “good life.” Yet, in one terrifying moment, it all disappeared. She was reduced to equality with all of us — a mortal person gone to meet her Creator.

It was a sobering event. It drove home the transitory nature of life. I’m sure it caused many people to pause and think about eternity for the first time in their lives.

The Bible says that most people live in life-long fear of death. In fact, the Bible puts it even stronger than that. It says that most people live in “slavery” to the fear of death (Hebrews 2:15). This is the reason that a death in the family, or the death of a friend or a celebrity, always has such an impact. It reminds us of our mortality, and it triggers our eternal perspective.

I think it is interesting to note that once Asaph’s eternal perspective was restored, he looked back on his combat with doubt and marveled over how stupid he had been. He concluded that he was as “senseless and ignorant” as a beast (Psalm 73:21-22).

Asaph wrapped up his psalm by praising the Lord for His faithfulness in words reminiscent of Paul when he wrote, “If we are faithless, He remains faithful; for He cannot deny Himself” (2 Timothy 2:13).

Whom have I in heaven but You?
And besides You, I desire nothing on earth.
My flesh and my heart fail,
But God is the strength of my heart and my portion forever.
For, behold, those who are far from You will perish;
You have destroyed all those who are unfaithful to You.
But as me, the nearness of God is my good;
I have made the Lord God my refuge,
That I may tell of all Your works.

The solution to Asaph’s spiritual agony was the restoration of his eternal perspective. He was reminded that this life is fleeting, and a day of judgment is coming. He realized that he may never see justice in this life, but one day justice will prevail. He realized that he had been called to live by faith and not by sight.

In the fifth and last part of this series on living with an eternal perspective, I will test you to see if you’re eternity conscious.