I believe our nation has reached the point of no return. We have the blood of 54 million aborted babies on our hands. We are polluting the world with our violent, immoral and blasphemous television programs and movies. We have become obsessed with sex, and we are hooked on drugs. 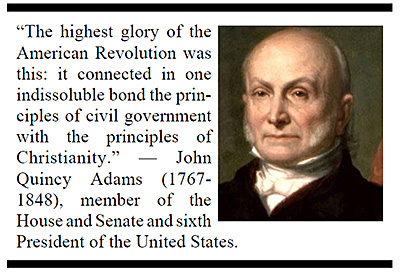 To illustrate how bad the situation is, let me share with you the story of a prayer. The story began in 1995 when a great prayer was written by Bob Russell who, at the time, was pastor of Southeast Christian Church in Louisville, Kentucky, one of our nation’s largest churches. The prayer was written in response to an invitation to pray at a breakfast hosted by the Governor of Kentucky.

A year later on January 23, 1996, Joe Wright, who at the time was pastor of Central Christian Church in Wichita, Kansas, decided to deliver the same prayer, with some minor changes, before the House of Representatives of the Kansas Legislature. It garnered nationwide attention when the Democrat leaders in the legislature called a press conference and condemned the prayer! Later, when it was read by Paul Harvey on his radio program, it prompted the largest response in the history of the program as thousands wrote in requesting copies of the prayer.

Here is the prayer:

Heavenly Father, we come before You today to ask Your forgiveness and seek Your direction and guidance. We know Your Word says, “Woe to those who call evil good,” but that’s exactly what we’ve done. We have lost our spiritual equilibrium and inverted our values.

We have endorsed perversion and called it “an alternative lifestyle.”

We have exploited the poor and called it “the lottery.”

We have neglected the needy and called it “self- preservation.”

We have rewarded laziness and called it “welfare.”

We have killed our unborn and called it “freedom of choice.”

We have shot abortionists and called it “justifiable.”

We have neglected to discipline our children and called it “building esteem.”

We have abused power and called it “political savvy.”

We have coveted our neighbors’ possessions and called it “ambition.”

We have polluted the air with profanity and pornography and called it “freedom of expression.”

We have ridiculed the time-honored values of our forefathers and called it “enlightenment.”

Search us, O God, and know our hearts today; try us and see if there be some wicked way in us; cleanse us from every sin and set us free.

Guide and bless these men and women who have been sent here by the people of Kansas and who have been ordained by You to govern this great state. Grant them Your wisdom to rule, and may their decisions direct us to the center of Your will.

I ask this in the name of Your Son, the living Savior, Jesus Christ.

Can you imagine political leaders publicly condemning such a prayer? And that was over 20 years ago! Since that time, our nation’s moral deterioration has greatly accelerated.

I believe we have reached the point where evil has become so entwined in the fabric of our nation that “our wound has become incurable.” I see no hope for us because we have turned our back on our only Hope — the Lord Jesus Christ.

The “city on a hill” is no longer sending forth any light. This point was emphasized by Messianic Rabbi Jonathan Cahn of New Jersey in the sermon he delivered at the Presidential Inauguration Breakfast in 2013 (which President Obama skipped). Here’s what he had to say: The “city on a hill” has grown dark. Its lamp has grown dim. Its glory is fading. For God is not mocked. No nation can war against the very source of its blessings and expect those blessings to remain. And as it was with ancient Israel, the city on the hill now stands under the shadow of judgment.

If we end up in the next election having to choose between a dishonest, power-hungry Jezebel and an ego-maniacal, guttermouth Clown, it will be because God has given us the kind of leaders we deserve.

In the meantime, let’s pray earnestly for the Rapture.