Why the Left and Islam Love Each Other 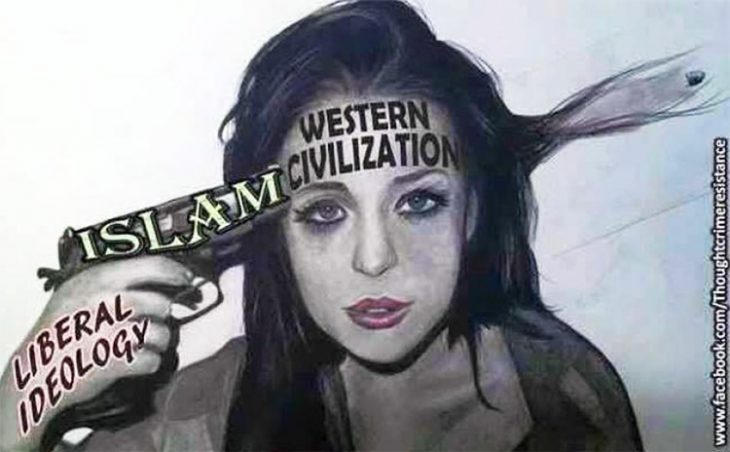 Someone recently sent me a thought provoking editorial cartoon I can’t reproduce because it contains some vile language.

So, I will just describe it and clean up the language. The cartoon depicted in four panels a conversation between two young people in their twenties — a man and a woman. The woman was wearing the Obama campaign symbol. In the first panel, the man says, “I don’t believe that women should have any rights, and I think gays should be hanged.” The young woman responds, “Wow! What a complete primitive idiot you are! You must be a Republican!” “No,” responds the man, “I’m actually a Muslim, and those are my religious beliefs.” To which the woman replies, “Oh, I’m sorry! I apologize! I hope you don’t think I’m Islamophobic.”

A few days later, I received a similar cartoon that showed a Muslim man holding a sign that read: “Islam demands: Death for Homosexuals! No free speech! Women stay home and submit to their husbands! Death to infidels!”Standing next to him was a young woman of college age holding a sign with an arrow pointing to the Muslim. Above the arrow were these words: “I’m a liberal and he doesn’t really mean that.”

As these editorial cartoons so vividly illustrate, the love affair between the Left and Islam is mind-boggling because it is irrational. The Left claims to believe in freedom of thought, freedom of speech, sexual liberation and democracy.

All of these values are the exact opposite of those that are held dear by Islam. There is not a Muslim dominated nation in the world today where there is a true democracy, free speech, a free press and equal rights for women.

And the history of Islam makes it clear that the moment Muslims become the majority in any society, they take action immediately to suppress freedom and repress all other religions.

Further, the Left also scorns religion and exalts Man rather than God whereas Muslims believe in a god and hold their religion in high esteem.

So, what explains the odd couple represented by the unity of the Left with Islam?

There can be only one explanation — they are unified by their common hatred of Christianity. The Left considers Christians to be outmoded relics of the past who stand in the way of their pet “progressive” programs like abortion, same-sex marriage, euthanasia, the right to suicide and Socialism. Further, Christianity is viewed as pie-in-the-sky nonsense that encourages people to rely on wishful thinking instead of reason.

Of course, the same could be said of Islam, but Muslims are a distinct minority in America, and so, the Left focuses its hatred on Christians. Islam shares the Left’s hatred of Christianity. According to the Quran, Christians are infidels who should either be forced to convert or else be subjugated or executed. So, the Left rallies Muslims to its side in its effort to defeat all politicians with Judeo-Christian values. This means the Left united with Islam is a perfect example of the old saying, “Politics makes strange bed partners.”

The union of the Left with Islam is a marriage crafted by Satan.