Israel declared its independence on May 14, 1948, but it was celebrated this year (2018) in Israel on April 19th. That’s because the date on the Hebrew lunar-solar calendar is the 5th of Iyar.

The first nation to recognize the new state was the United States. President Harry S. Truman issued the recognition statement only 11 minutes after the declaration went into effect. American recognition proved to be one of the crucial keys to the survival of Israel.

What prompted President Truman to act so quickly and so decisively? It’s only in recent years that the full story has emerged. 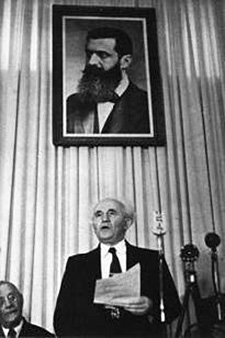 David Ben-Gurion reads the Israeli Declaration of Independence on May 14, 1948 in Tel Aviv.

But first, some background. The Hebrew prophets were given many prophecies concerning the Jewish people. It was prophesied that their disobedience would lead to their worldwide dispersion from their homeland of Israel and that they would be persecuted wherever they went (Deuteronomy 28:58-67). But the Lord promised that a remnant would be preserved (Jeremiah 30:11) and that one day they would be regathered in unbelief to their homeland (Isaiah 11:10-12) where their state would be re-established (Isaiah 66:7-8).

The dispersion prophecies had been completely fulfilled by the beginning of the 20th Century. As that century dawned, the Jewish people were scattered worldwide. And just as prophesied, everywhere the Jews had roamed for the past two thousand years, they had been persecuted. But, amazingly, they had kept their identity, unlike any other nation that had become so scattered. 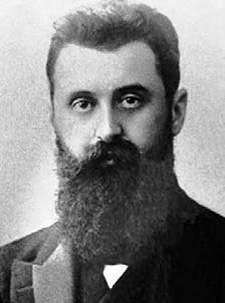 In the late 19th Century God raised up a visionary by the name of Theodore Herzl. He was a Hungarian Jew who lived in Vienna. In 1896 he published a booklet in which he called for the Jewish people to return to their homeland. The booklet sparked the imagination of the Jewish people worldwide and led to the First Zionist Congress which was held in Basel, Switzerland in 1897. After this historic assembly had adjourned, Herzl wrote in his diary these prophetic words:1

At Basel I founded the Jewish State. If I said this out loud today, I would be greeted by universal laughter. In five years perhaps, and certainly in fifty years, everyone will perceive it.

The next great milestone came in 1917 as a result of World War I. During that war the Turks sided with the Germans. Their realm, called the Ottoman Empire, included most of the lands of the Middle East, including Palestine which they had ruled for 400 years. When the Germans lost the war, the Turks went down with them, and their empire was divided up among the Allied victors. Britain received Palestine while the French were given Syria, Lebanon, and a part of Iraq.

In November of 1917 the British issued the Balfour Declaration in which they announced their intention to create a homeland for the Jewish people within the territory of Palestine. At that time, Palestine consisted of all of modern day Israel and Jordan — an area of 45,000 square miles (see the map below). 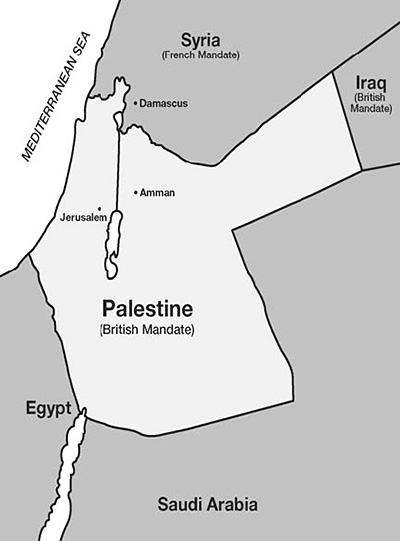 But hardly had the ink dried on the Balfour Declaration before the British decided in 1922 to give two-thirds of Palestine to the Arabs in order to secure their access to Arab oil. This led to the creation of a Palestinian state called Transjordan (see the map below). 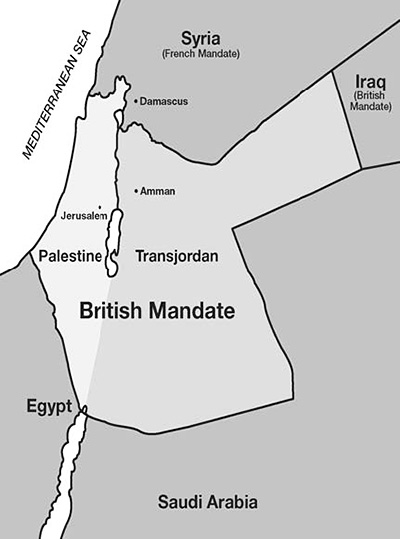 This British action to placate the Arabs left a small area of land for the promised Jewish state — a sliver of land only 10,000 square miles in size, smaller than Lake Michigan or the state of New Jersey.

The League of Nations Mandate

Immediately thereafter, the League of Nations entrusted what was left of Palestine to Britain as a Mandate, and the British began to rule the land with the ultimate goal of guiding it to self-government. But the British soon found themselves in the middle of a bloody Jewish-Arab struggle for the land.

As the struggle intensified and more and more British soldiers were killed, the British people began to pressure the government to look for a way to extricate themselves from the bloodbath. The pressure mounted in late 1946 when Winston Churchill, leader of the opposition to the Labor Government, began publicly urging an end to the Mandate. He declared, “If we cannot fulfill our promises to the Zionists, we should, without delay, place our Mandate for Palestine at the feet of the United Nations, and give them due notice of our impending evacuation from the country.”2 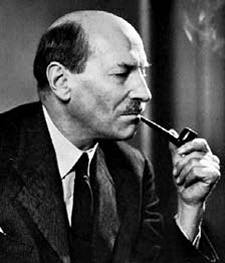 Clement Attlee (British Prime Minister from 1945 to 1951) reluctantly gave ground to the mounting pressure. On February 18, 1947, Attlee’s spokesman announced: “His Majesty’s Government have of themselves no power under the terms of the Mandate to award the country to the Arabs or the Jews, or even to partition it between them…We have, therefore, reached the conclusion that the only course open to us is to submit the problem to the judgment of the United Nations.”3

This action by the British government was most likely a ruse to satisfy public opinion, for no one in the government believed that there were enough votes in the United Nations to end the Mandate. The Russians and their allies were staunchly pro-Arab, and their bloc, together with the Arab states, represented enough votes to prevent a British withdrawal that might lead to a partition of the land which the Arabs wanted all to themselves.

The British announcement led to the calling of a special session of the General Assembly of the United Nations to deal with what was dubbed as “The Palestine Question.” The session was held at Flushing Meadows, New York, from April 28th to May 15th of 1947.

Two significant developments came out of this special session. First, the General Assembly decided to set up an eleven member investigating committee called The United Nations Special Committee on Palestine (UNSCOP). Its purpose was to study the problem of Palestine and propose a solution.4 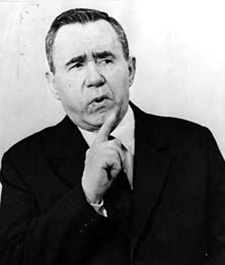 The second development was a diplomatic bombshell in the form of a surprise announcement by the Soviet Ambassador, Andrei Gromyko. He attacked what he called the “bankruptcy of the mandatory system of Palestine” and then went on to endorse “the aspirations of the Jews to establish their own state.”5

Why the Russians pulled this about-face is still a mystery to this day. Most likely, they were motivated by a desire to force the British to withdraw from the Middle East, believing that the much more numerous Arabs could fill the resulting political vacuum, ending up with a weak Arab state that would be dependent on the Soviets. Whatever the reason, the Russian move caught the British flat-footed. They were suddenly faced with the reality that the process had gone too far for them to put the brakes on it.

In the second part of our study of the amazing events that led up to the prophesied rebirth of the nation of Israel, we’ll look at the United Nations’ role in this historic event.

The Miracle of Israel: A Witnessing...