6. How is your book laid out? And, why did you include twelve imagined stories and twelve full-page illustrations of angels?

I divided The Mighty Angels of Revelation based on the thematic sections found in the book of Revelation. The ten sections include:

Each of these sections is further broken down into chapters dedicated to covering the bios and activities of each of the 72 angels or groups of angels found in Revelation.

These ten sections are complemented with a foreword by Terry James of the “Rapture Ready” website and an introduction that provides background information to the book of Revelation and the study of Angelology. The book also includes a concluding section, for Revelation 22 ends with the final message of Jesus Christ whereby He promises three times that He will indeed return and claim His inevitable victory, which He will then share with His children. In this section, Vic Batista pours out his heart for the lost, offering the readers an invitation to come to know Jesus as their Savior.

Each of these 12 sections (including the introduction and conclusion) begins with an illustration of an angel in order to help the imagination break those chains of preconception we all have about what angels look like. I couldn’t draw a stick figure if my life depended on it, so I enlisted the talents of Shalis Stevens. 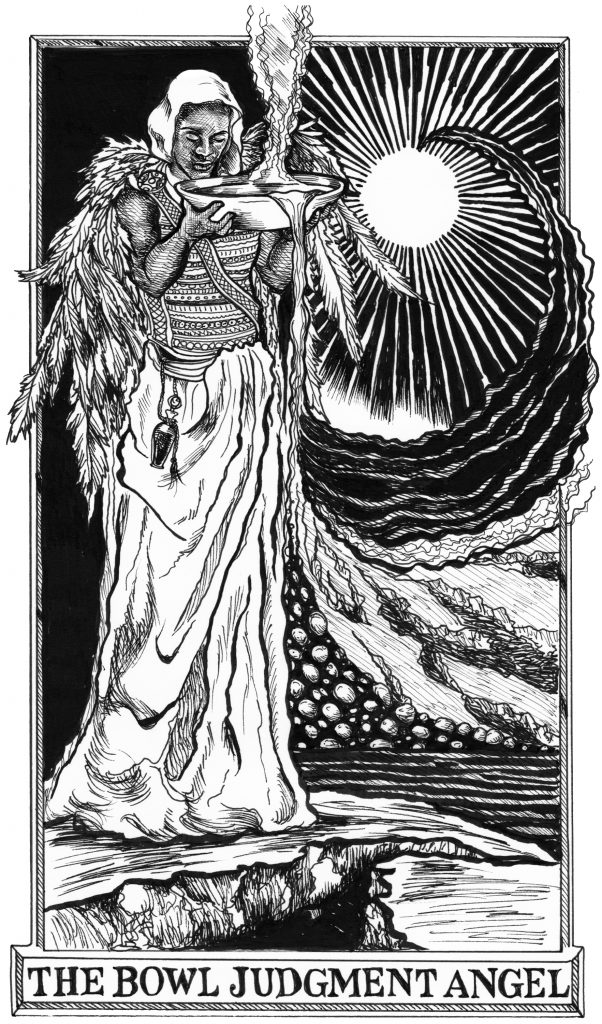 I had written a number of Bible colleges asking if they had any students they’d recommend to take on the project. Once I had gotten a few good candidates, I held a little art contest among my editorial team, and Shalis’ art style clearly fit the direction Vic and I wanted to go. On top of that, we learned that Shalis was not just an art student, but holds a master’s degree in painting and teaches students herself. She’s been able to so vibrantly capture that which is beyond our human imagination, and she’s just been wonderful to work with.

Along with starting each section with an angel illustration, I have also added a few pages of introductory story that revolves around two personages: the Revealing Angel and the Elder. The former serves as the angelic guide to the latter — the Apostle John.

Obviously, all of the introductory stories that begin each section are elaborations on Scripture, imagining scenarios that the text hints at but doesn’t necessarily describe. I ask that the reader take these stories as intended — as imaginative fiction that illustrates the biblical narrative.

I wanted to use these introductory stories to help the reader better connect with the characters in Revelation, for while some angels command a great deal of text, many only garner one mere verse, as the Revealing Angel does in the very first verse. I desired to show the various angels’ diverse backgrounds, their unusual settings, and their varied duties in the devoted service of their Sovereign in ways that would spark the reader’s imagination.

7. What is the most important truth you want people to take away from this book?

Revelation contains the largest concentration of angels in the whole Bible. And what a variety! So, our approach to teaching Revelation comes from the many, many different angels’ perspectives. Along this journey we end up teaching the reader both Eschatology and Angelology.

But, here’s the true purpose in writing The Mighty Angels of Revelation. We want the reader to end up glorifying Jesus, the Son of God. Jesus Christ victorious is the total sum and focus of the book of Revelation. The angels are merely window-dressing. The real center, the true hero, is the King of kings.

We hope to excite Christians about Christ’s present majesty and His coming victory as described by the various angels in the book of Revelation, and so bring God the praise He so richly deserves.

So, come, I invite you to travel along with a man called the Elder and his angelic guide as the end times are revealed throughout the book of Revelation in stunning detail. Along the way, you will meet 72 of God’s mighty angels as they proclaim God’s messages of warning and hope to a lost world. Together let us encounter…The Mighty Angels of Revelation!

Are they [the angels] not all ministering spirits, sent out to render service for the sake of those who will inherit salvation? Hebrews 1:14