The Perfect Storm: Our Society in Chaos (Part 1 of 4)

The first time I can remember hearing the term, “perfect storm,” was in 1991 when a very strong storm off the coast of Nova Scotia was given that name by meteorologists. The storm was produced by a cold front from the northwest that converged with a cyclone surging down from the northeast. The storm headed south toward New England where it converged with Hurricane Grace. This convergence of a cold front, a cyclone and a hurricane produced the “perfect storm.”

The storm got a lot of publicity because it produced waves up to 30 feet tall that flooded President George H. W. Bush’s vacation home in Kennebuckport, Maine, causing major damage. It got even more attention when it veered back up to its starting point off the coast of Nova Scotia where it produced waves as high as 100 feet. It was in this area that the fishing vessel, Andrea Gail, sank, killing her crew of six. This tragedy inspired the book, and later movie, The Perfect Storm (2000).

Today, we here in the United States are experiencing another “perfect storm” of a different type that is far more dangerous. It is a storm that hit us suddenly and overwhelmingly. First, came the coronavirus pandemic which produced a stock market crash of 8,000 points. Then, came a shutdown of the economy, followed by widespread rioting and looting in the streets. Millions have been thrown out of work, thousands of businesses are declaring bankruptcy and millions of people are defaulting on their rental and mortgage payments.

One moment our nation was sitting on top of the world enjoying one of the greatest economic revivals in history. Then, in what seemed like a moment’s notice, we plunged into economic, social and political chaos.

I once witnessed a similar overnight societal collapse in Russia in 1992. When I arrived in Moscow, I could hardly believe my eyes. The nation was in absolute chaos. Only a few months previously, this had been the most powerful nation on planet earth, with more nuclear weapons than any other country.

I found all the stores in Moscow empty — and I mean completely empty of both food and clothing. Thousands of people were standing on the sidewalks with card tables full of items to barter. People were trading food products like milk and potatoes for blue jeans, shirts and underwear. At the first class hotel where I was staying, the only food they had to serve was potatoes, and a Coke had to be shared with three other people.

As I viewed this heart-breaking spectacle, the Lord spoke to my heart and told me to go back to America and share the devastation that He can pour out in an instant, no matter how powerful the nation may be — just as He did with Babylon in Old Testament times.

In contrast, during that same time period, God had poured out abundant blessings on our nation. Further, we have churches on every corner, an average of five Bibles in every home, and we have the Gospel being proclaimed on radio and television.

In short, unlike the Russian people, we have no excuse before God for our wanton rebellion against Him and His Word. The verse the Lord laid on my heart for this nation was Luke 12:48 which says that to those to whom much is given, much is expected.

I have been proclaiming that message far and wide since that time — in books, magazine articles, sermons, television programs and video productions. And I discovered early on that people did not want to hear the message.

That’s nothing new. The prophetic voices God sent to nations throughout Old Testament times were treated the same way. People mocked them, scoffed and jeered at them, harassed them and even tried to kill them.

Likewise, I have found that Americans tend to respond in the same way to warnings of God’s impending wrath on this nation. “Never America!” they chant. I’m convinced that many believe God is sitting on His throne draped in an American flag! 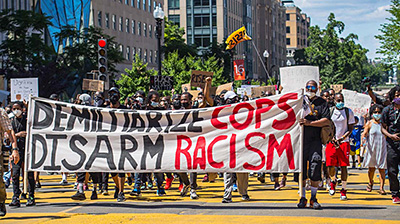 How God Deals with Rebellious Nations

The Bible clearly reveals a definite pattern of how God deals with a nation He has blessed when it starts turning against Him. First, He sends prophetic voices to call the nation to repentance. In our case, God began to do that in the mid-1970s when He raised up voices like David Wilkerson, Francis Schaeffer, Aleksandr Solzhenitsyn and Donald Wildmon. Since that time, the Lord has demonstrated great patience with us as He has continued to send prophetic warnings, despite our refusal to repent.

When we dug in our heels and stubbornly resisted the calls to repentance, the Lord began to bombard us with remedial judgments to get our attention — judgments like the 9/11 attacks (2001), Hurricane Katrina (2005), the Stock Market Crash of 2008 and the election of Barack Obama in 2008. And now, the “perfect storm.”

In the second part of this look at the “perfect storm” bearing down on America, we will examine how destruction is coming from within.