The Perfect Storm: Our Society in Chaos (Part 2 of 4)

When President Trump was running for election in 2016 on the motto of “Make America Great Again,” I warned repeatedly that no one could make our nation great again as long as we were thumbing our nose at God. I pointed specifically at several things in particular:

God orchestrated the election of Trump and gave us a window of grace. God allowed Trump to launch an “economic miracle,” but I believe He allowed it in order to dramatize His destruction of it overnight.

God wanted us to be fully aware that we are experiencing His wrath. The problem is that most Americans have become so secular that they cannot perceive the spiritual any longer. So, they dismiss God’s wrath as “bad luck.”

We are reaping what we have sown (Galatians 6:7). As I pointed out in my book, God’s Prophetic Voices to America, we began surrendering our nation’s Christian heritage at the beginning of the 20th Century when our mainline churches started treating the Bible as Man’s search for God rather than God’s revelation to Man. These churches abandoned the true Gospel for the Social Gospel, and the churches began to die.

This apostasy began at the same time that Humanists were beginning to organize and push their atheistic agenda, calling for the secularization of our society.

Very quickly, Humanism (faith in Man) became our religion. Materialism (the love of money) became our God, and our lifestyle became Hedonism (the pursuit of pleasure). This was in fulfillment of prophecy. In general terms, the Bible says that in the end-times, society will become as evil as it was in the days of Noah (Matthew 24:37) — a time that was characterized by immorality and violence (Genesis 6:5 and 11).

Specifically, the Apostle Paul prophesied that in the end-times men would love three things — self, money and pleasure (2 Timothy 3:1-5). That’s precisely where we are in America today. But God cannot be mocked (Galatians 6:7). When those three things converge into a “perfect storm,” the result is always Nihilism — which is a fancy philosophical word for despair. And thus, we find our society wallowing in despair as people seek meaning in all the wrong things — like sex, money, drugs, alcohol and the pursuit of power. 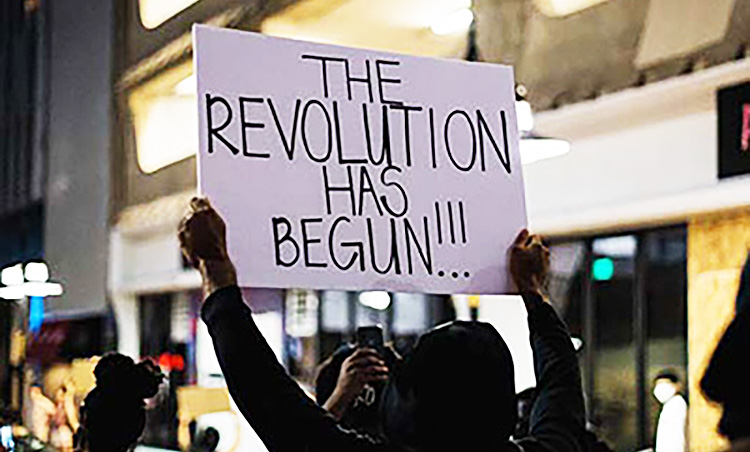 Basically, what we are witnessing today is God allowing us to destroy ourselves. Theologians call it “abandonment wrath.” It is outlined in detail in Romans chapter one. That chapter says that when a nation becomes characterized by ungodliness, unrighteousness and the suppression of truth — and when it begins to worship the creation rather than the Creator — God will step back, lower His hedge of protection around the nation and allow evil to multiply.

When this happens, Romans 1 says the first manifestation will be a sexual revolution (verse 24). If there is no repentance, God will then step back a second time and lower the hedge further, producing a plague of homosexuality (verses 26-27). If the rebellion persists, God will lower the hedge a third and final time, delivering the nation over to a depraved mind (verses 28- 32). That’s where we are.

In the third part of this look at the “perfect storm” bearing down on America, we will examine how destruction is coming from government.