The Prophecy of Elam 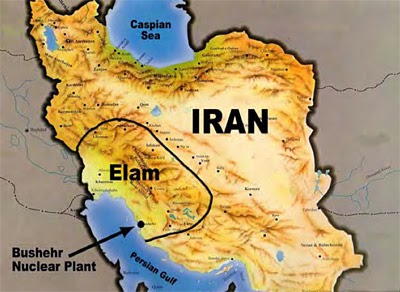 I first ran across Bill Salus in 2008 when he published his first book, Isralestine: The Ancient Blueprints of the Future Middle East. He seemed to spring onto the Bible prophecy stage out of nowhere. I learned later that he had spent most of his life as a mortgage broker until his Christian conversion in 1990, at which point he became a music minister and an ardent student of Bible prophecy. In 2010 he went into full time ministry with the establishment of Prophecy Depot Ministries which is located in La Quinta, California. 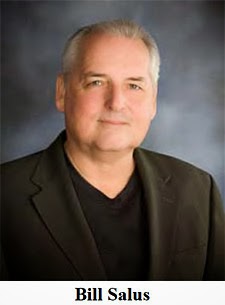 His first book focused on the prophetic meaning of Psalm 83. It was not easy reading. I found the writing to be mechanical, repetitious and tedious. It was also unfocused, as he spent much of his time chasing irrelevant rabbits. But the book was very insightful, and I quickly concluded that Bill had been anointed by the Lord to see the end time significance of prophecies that had been either ignored or overlooked by other prophecy scholars.

I therefore endorsed his first book because I felt that he had discovered a significant end time prophecy that would help us to better understand the well-known prophecy of Gog & Magog contained in Ezekiel 38-39.

Many of the established Bible prophecy experts reacted very negatively to Bill’s interpretation of Psalm 83. After all, who was this upstart from nowhere who was suddenly proclaiming that he had found an end time prophecy that had been overlooked?

Actually, I was not surprised at all that Bill had made such a discovery. That’s because we are told in Daniel 12:8-9 that not all end time prophecies will be understood until the time comes for them to be fulfilled. Furthermore, my study of First Coming prophecies had convinced me long ago that there were most likely Second Coming prophecies that had not been recognized as such.

Take, for example, the First Coming prophecy in Hosea 11:1 which reads as follows: “When Israel was a youth, I loved him, and out of Egypt I called my son.” How could anyone recognize this as a prophecy related to the First Coming of the Messiah until after something happened in the life of Jesus that related to it? It doesn’t even read like a prophecy. It reads like nothing more than a simple historical statement referring to the deliverance of Israel from Egyptian captivity.

But when King Herod commanded the killing of the male children of Bethlehem, Jesus’ parents, Joseph and Mary, fled with Him to Egypt. Later, Joseph had a dream in which an angel told him to return to Israel. So, Jesus, the Son of God, was “called out of Egypt.” Even so, the statement in Hosea might never have been recognized as a prophecy about the Messiah if it had not been for the fact that the Holy Spirit revealed this truth to Matthew when he was writing his Gospel (Matthew 2:14-15).

In like manner, Psalm 22 reads like a description of agonies experienced by King David. Yet, in retrospect, after the torture and death by crucifixion that Jesus experienced, it is obvious that David was speaking prophetically in detail about the death of the Messiah, probably without realizing it himself.

I’m sure that as we get closer to the Rapture, the Tribulation and the Second Coming, the Spirit will reveal to students of Bible prophecy the relevance of additional overlooked prophecies concerning the end times. And I believe that has happened again with Bill Salus, for once again Bill has put his finger on a passage that few have paid attention to, and he has revealed its end-time significance in his new book, Nuclear Showdown in Iran: Revealing the Ancient Prophecy of Elam. 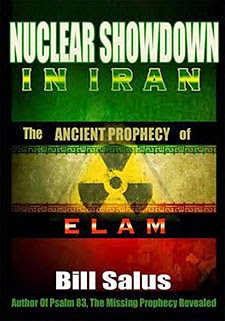 The book is exceptionally well written. It flows. It is easy to understand. And it is focused. The passage it so beautifully illuminates is Jeremiah 49:34-39 which describes the fate of the ancient nations of Elam. It reads as follows:

34) That which came as the word of the LORD to Jeremiah the prophet concerning Elam, at the beginning of the reign of Zedekiah king of Judah, saying:

35) Thus says the LORD of hosts,
‘Behold, I am going to break the bow of Elam,
The finest of their might.

36) ‘I will bring upon Elam the four winds
From the four ends of heaven,
And will scatter them to all these winds;
And there will be no nation
To which the outcasts of Elam will not go.

37) ‘So I will shatter Elam before their enemies
And before those who seek their lives;
And I will bring calamity upon them,
Even My fierce anger,’ declares the LORD,
‘And I will send out the sword after them
Until I have consumed them.

38) ‘Then I will set My throne in Elam
And destroy out of it kings and princes,’
Declares the LORD.

39 ‘But it will come about in the last days
That I will restore the fortunes of Elam,'”
Declares the LORD.

This rather obscure passage says that “in the last days” Elam’s military might will be broken and that the nation’s population will be widely scattered. The passage further states that this disaster will happen because of the Lord’s “fierce anger” against them. But the passage ends with good news. It says that one day the Lord will bring back the captives of Elam and reestablish them in their land. It also promises that at that time, the Lord will set His throne in Elam.

The first thing Bill does is to clearly delineate the geographical area of Elam. He identifies it as one-tenth of modern day Iran, being located between the Persian Gulf and the Zagros Mountains, as indicated in the adjacent map. He then points out that the Iranian nuclear reactor is located today in the southern portion of this precise area at Bushehr, on the coast of the Persian Gulf.

Bill spends considerable time proving rather conclusively that no part of Jeremiah’s prophecy about Elam has been fulfilled at anytime in past history. He then postulates that its most likely fulfillment will occur when the nuclear reactor is destroyed, either by the Israelis or by an earthquake, releasing radiation that will force the evacuation of the whole area.

Bill then speculates that at the end of the Tribulation when the Lord returns to conduct His Millennial Reign, He will regather the Elamites to their land and establish His throne among them.

This latter point about the throne is the most mysterious part of the entire prophecy. That’s because the Bible makes it clear in many places that Jesus will reign from Jerusalem (see, for example, Isaiah 2:1-4 and Zechariah 8:1-3). So, what does it mean when the passage says, “I will set my throne in Elam”?

Bill says it could refer to the establishment of a government that will be yielded to God. Or, it could be referring to a secondary capital where Jesus might go from time to time to relax.

Bill says the Lord’s “fierce anger” will be focused on the area of Elam because Iran is using that area to develop a nuclear weapon which it has declared that it will use to destroy the Jewish state. Bill concludes that the destruction of Elam is imminent and is most likely to occur before the war described in Psalm 83. One scenario he considers is the possibility that Israel might militarily strike the Bushehr reactor, which, in turn, would trigger the Psalm 83 war in which all the nations with a common border with Israel will unite and attack Israel with the purpose of annihilating the Jewish state.

One mistake that Bill makes in his book, for which he will be heavily criticized, is that he presents a chronological listing of end time events as follows:

Such a list destroys the imminence of the Rapture. Bill tries to cover himself by stating that the list is only an “estimation,” and that “the Rapture could occur before any of these events.” But I suspect that his critics will ignore this caveat.

When Bill refers to me in his writings, he always calls me an “Eschatologist.” I hate that term. It sounds so academic and stuffy. To me, such a term is appropriate only for a person devoted to the academic study of prophecy. I am a prophecy teacher and preacher, not a prophecy academician.

Bill is a true Eschatologist — together with such people as Tommy Ice and Arnold Fruchtenbaum. And, as such, I expect Bill to continue to supply us with insightful discoveries he is likely to make from his ardent study of God’s Prophetic Word.

The World Is on Edge and Waiting for...

The Future of America: The Deist...