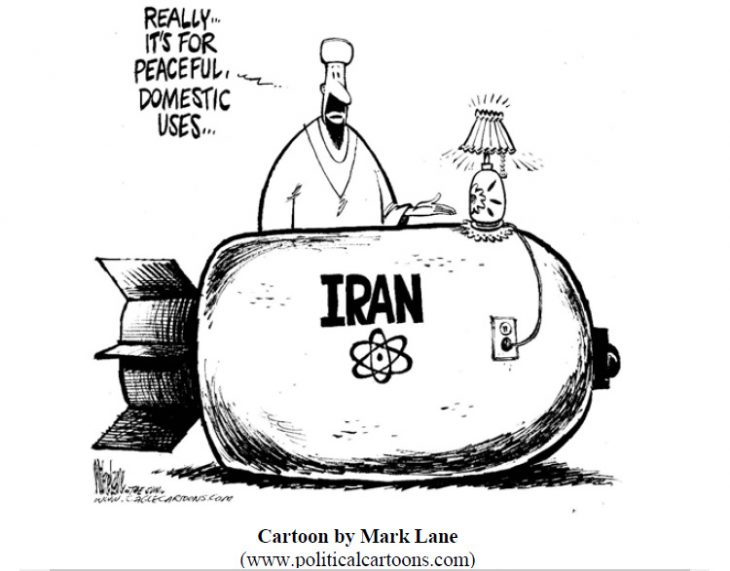 In the past this year, I praised President Trump for finally doing what previous presidents have promised to do but have failed to do — namely, recognize Jerusalem as the legitimate capital of Israel.

In this article I want to thank President Trump for having the courage to withdraw from the wretched deal that President Obama made with Iran (called “The Joint Comprehensive Plan of Action,” or JCPOA). The deal included China, Britain, Russia, France and Germany — all of whom tried to pressure Trump into staying with the pact.

The Nature of the Deal

The deal, which was put together by Israel haters, was supposedly designed to prevent Iran from gaining nuclear weapons in exchange for the lifting of economic sanctions. It was a classic “Chamberlain Deal” from the get-go. Just as Neville Chamberlain stupidly put his faith in Hitler in 1939 when he made the infamous Munich Deal to give Hitler the Sudetenland in exchange for a promise of peace, the signatories to the Iran Deal decided they could trust the world’s leading sponsor of terrorism to keep its word.

So, President Obama agreed to lift our economic sanctions on Iran, provide them a payoff with billions of assets we had frozen and allow them to basically self-enforce their agreement to put their nuclear development on hold. It was an insane agreement that saved the Iranian economy, provided them with funding for their terrorist activities and paved the way for them to continue with their development of nuclear weapons and ballistic missile delivery systems.

The Iranians must have enjoyed a big laugh over the naiveté of the Western powers.

The Motivation for the Deal

Or, were the Western leaders really all that naive? I doubt it. I suspect instead that it was simply their way of allowing the Iranians to continue developing nuclear weapons and their delivery systems behind the scenes, with the hope that the ultimate result would be the annihilation of Israel.

Evidence of this can be found in their reaction to the incredible Israeli espionage raid that produced 11,000 documents detailing Iran’s secret nuclear weapons program. Despite the fact that these records clearly showed that the Iranian leaders had been lying all along, the Western leaders declared there was no “smoking gun”!

President Obama knew he could never get the sordid deal approved by the Congress, so he backed off from packaging it as a treaty. Instead, he decided to make it just an executive agreement. Fortunately, that decision made it easy for President Trump to toss it aside.

The two architects of what amounted to a stab in the back of Israel were Obama and his Secretary of State, John Kerry. And, as you can imagine, both threw a fit over Trump’s decision. Obama declared that “walking away from the JCPOA turns our back on America’s closest allies.” Interesting. China, Russia, Germany and France are America’s closest allies? Since when? Surely he wasn’t speaking of Iran whose leaders mindlessly chant, “Death to America!” Even Britain pales as an ally compared to the nation that is truly our greatest ally — Israel.

John Kerry issued the strongest denunciation, claiming that Trump’s decision “empowers Iran’s hardliners.” Incredible! Is he saying that the current fanatical religious leaders of Iran are not hardliners? It was the JCPOA deal that enhanced the power of the hardliners, making it easier for them to increase their totalitarian control over their people.

Looking to the Future

It is refreshing to have a President who keeps his campaign promises, who is willing to face the stark realities of international politics and who is determined to put the national interests of the United States first. Even more important from a biblical viewpoint, Christians should be rejoicing that President Trump is willing to support the only nation that is our true ally, for those who bless Israel will be blessed in return (Genesis 12:3).

#Christians should be rejoicing that #PresidentTrump is willing to support the only nation that is our true ally, for those who bless #Israel will be blessed in return. Click To Tweet

Let us pray earnestly for the overthrow of the corrupt and heartless Iranian regime. And let us pray for God’s supernatural protection of Israel.

Meanwhile, keep in mind the words of Psalm 2 which says that while all the nations of the world conspire against God and His Anointed One, our Heavenly Father sits in Heaven and laughs — not because he does not care, but because He has the wisdom and power to orchestrate all the evil of Man and Satan to the triumph of His Son. Hallelujah!