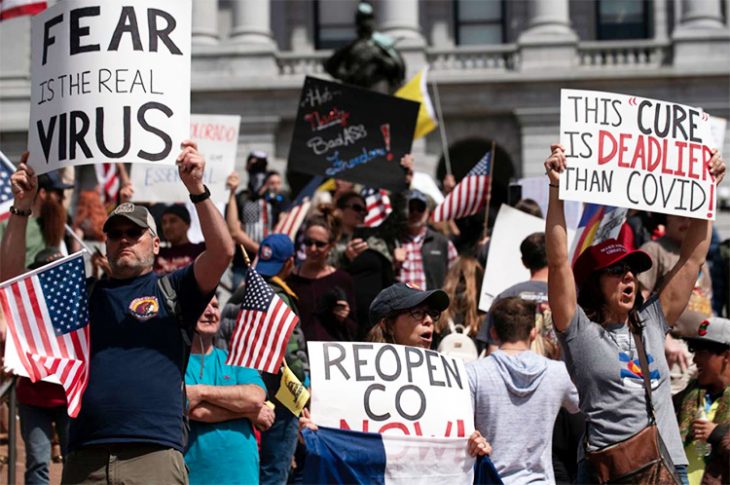 Many have been asserting all along that the cure our nation has pursued for the coronavirus — namely, stay-at-home orders and business-shutdowns — is going to prove to be more painful than the virus itself.

That assertion seems to be coming true before our very eyes as millions of people have been thrown out of work and thousands of businesses have declared bankruptcy.

But there is a greater long-range threat on the horizon that could prove to be even more devastating. I’m thinking about the impact of the stimulus packages passed by the Congress. They have added four trillion dollars to our national debt overnight. And subsequent packages could easily add an additional one to two trillion, making the total somewhere around six trillion.

Our national debt was already at $24 trillion when Congress enacted the pandemic stimulus packages. But that is not the true debt level of our national government. When you add to that our government’s unfunded Medicare and Social Security promises, plus pension and health care liabilities, the total debt of our national government before the pandemic came to over $124 trillion, or a total of $802,000 per taxpayer! (For detailed statistics, see the National Debt Clock at www.truthinaccounting.org.)

And how are we covering the cost of the stimulus packages? We are doing so by selling treasury bonds and printing money. That solution means that two grim prospects are staring us in the face — either a runaway inflation or a debt service so great that it crushes our economy.

The Danger of Inflation

Most people do not recognize the devastating impact of inflation, so let me give you some examples. In 1960 when my wife and I got married, we could buy a week’s worth of groceries and household needs for less than $25. Seven years later in 1967, we purchased our first house. It was located in Sherman, Texas. It was a new, three-bedroom, two-bath brick home in a very nice neighborhood. It cost $17,500. The payments were $200 a month, and I was financially stretched to make them on my professor’s salary of $9,000 a year.

The worth of the dollar was suddenly and radically changed by the rapid inflation that occurred when President Nixon abandoned the gold standard in the 1970s, resulting in a rate of 11%. During the administration of President Jimmy Carter (1977-1981), the rate shot above 14% and prices began to escalate so fast that restaurants stopped printing the price of meals on their menus. Instead, they penciled the prices in each day. In comparison, the inflation rate for our nation during 2019 was 1.5%.

The point is that rapid inflation is a monster that can make all of your savings worthless overnight.

The Threat of Deflation

And then there is the threat of deflation which could be produced when the interest rates on our national, state and city debts result in bankruptcies and defaults on retirement plans and entitlement programs like Social Security and Medicare.

The bottom line is that we cannot continue to pile up debt by trying to kick the can down the road. The chickens are going to come home to roost, particularly when there is no political will to cut our over-bloated city, state and national budgets.

Further, we need to keep in mind that we are acting irresponsibly by placing our debts on the shoulders of our children, grandchildren and great-grandchildren. What we are doing is equivalent to my purchasing a 50 million dollar mansion on a 100-year note that obligates my ancestors to make the mortgage payments long after I am dead.

The Judgment We Are Begging For

I have always believed that God’s ultimate judgment on our nation for our unrepentant sins would be economic in nature. I first expressed this belief in my book, America the Beautiful? (2003). When considering the possible ways in which God might pour out His wrath on this nation, I wrote, “The first thing that comes to mind is an economic catastrophe that will result from our out of control debt situation… There is no way to escape the conclusion that America has become a debt junkie.” I concluded with this observation:

I believe an unprecedented economic collapse is highly likely because money is the real god of America, and the true God of this universe is a jealous One who does not tolerate idolatry. God, by His very nature, is going to be compelled to destroy our false god.

I went to the Soviet Union in 1992, shortly after the collapse of the Communist government. The nation was in absolute chaos. It was hard to believe that only a few months previously this had been the most powerful nation on planet earth, with more nuclear weapons than any other country.

In Moscow, all the stores were empty — and I mean completely empty of both food and clothing. Thousands of people were standing on the sidewalks with card tables full of items to barter. People were trading food products like milk and potatoes for clothing and other essentials. At the first-class hotel where we were staying, the only food they had to serve us was potatoes, and we had to share one Coke between four of us.

As I viewed this heart-breaking scene, the Lord spoke to my heart and told me to go back to America and share the devastation He can pour out on a nation in an instant, no matter how powerful it may be — just as He did with Babylon in Old Testament times.

In contrast, during that same time period, God had poured out abundant blessings on our nation. Further, we have churches on every corner, an average of five Bibles in each home and we have the Gospel being proclaimed on radio and television. In short, unlike the Russian people, we have no excuse before God for our wanton rebellion against Him and His Word. The verse the Lord laid on my heart for this nation was Luke 12:48, which says, “And from everyone who has been given much, shall much be required…”

God has sent prophetic voices to this nation to call us to repentance, and He has emphasized the seriousness of their messages by inflicting us with remedial judgments like the Vietnam War, the 9/11 attacks and Hurricane Katrina.

But we have turned a deaf ear and have plunged full speed ahead with our ungodly behavior. We are literally begging for the wrath of God, and when it falls, we will have no one to blame but ourselves. We need to remind ourselves of these words in 2 Chronicles 7:

13) If I shut up the heavens so that there is no rain, or if I command the locust to devour the land, or if I send pestilence among My people,

14) and My people who are called by My name humble themselves and pray and seek My face and turn from their wicked ways, then I will hear from heaven, will forgive their sin and will heal their land.