Was Secretary of State Marshall correct in his assessment of President Truman’s motivations? Was the President’s decision concerning Palestine motivated by politics?

On the surface, this would be easy to believe. After all, New York state had more Jews than the state of Israel, and the President was facing what seemed to be impossible odds. His popularity rating was low and his party was split three ways.

Senator Strom Thurmond of South Carolina was pulling out to run as the candidate of the Dixiecrat Party, a move that threatened to take the Southern states away from the President. And FDR’s former Secretary of Agriculture and Vice President, Henry Wallace, was determined to run on the Progressive Party ticket. This move threatened to attract the liberal wing of the Democrats.

But the historical record seems to indicate that Truman’s decision was deeply rooted in his personal values and his Christian faith. All his life he was a voracious reader. He always claimed that he had read the Bible twice before he even started to school! He knew the history of the Jews by heart, and he understood their biblical claim to the land.28

His heart was revealed early on in April of 1943 when he was serving in the Congress as a Senator from Missouri. He flew to Chicago to speak at a huge rally that was held at Chicago Stadium to urge help for the doomed Jews of Europe. There was no political gain to be made from such an appearance, but Truman went anyway, and he spoke with great passion.

He referred to Hitler as a “mad man,” and he boldly implied criticism of President Roosevelt for not doing enough to help the Jews. Referring to FDR’s “Four Freedoms” speech, Truman observed:29

Merely talking about the Four Freedoms is not enough. This is the time for action. No one can any longer doubt the horrible intentions of the Nazi beasts. We know they plan the systematic slaughter throughout all of Europe, not only of the Jews, but of vast numbers of other innocent peoples.

Proverbs 21:1 states that the hearts of rulers are like “channels of water in the hand of the Lord.” The passage goes on to state that God can turn their hearts “wherever He wishes.”

The story of Harry Truman’s decision to support the establishment of a Jewish state and grant it immediate recognition is a story about how God prepares a man to make an historic decision that would fulfill Bible prophecy.

First, Truman was grounded in the Scriptures and was wellacquainted with the history of the Jews. Then, a Jewish man he met in the military during World War I became his best friend and business partner. He was deeply impacted by the suffering of the Jewish people during the Holocaust. And when the time came for his momentous decision regarding Palestine, two of his closest advisors were staunch supporters of Israel.

The Lord even touched the heart of Israel’s greatest opponent within the Administration — Secretary of State George Marshall — and at the very last moment, he consented to the President’s course of action.

How else can the pivotal role of Eddie Jacobson be explained, except supernaturally? He was a simple store clerk whom God positioned in the center of Truman’s life, ready to take action at just the right moment.

The Bible says that God made a promise to Abraham that He would bless those who bless the Jews and curse those who curse them (Genesis 12:3). God has been faithful to that promise throughout history. 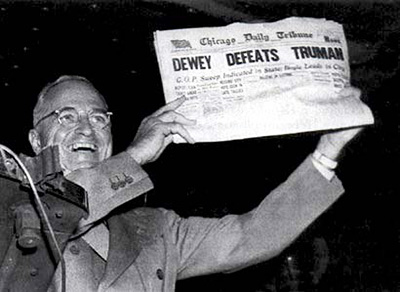 The Chicago Tribune was so confident of Truman’s defeat in 1948 that they printed a headline to that effect before the ballots were counted!

In May of 1948, President Harry S. Truman greatly blessed the Jewish people. In November, God returned the blessing to him as he won re-election in one of the most astounding victories in American history. 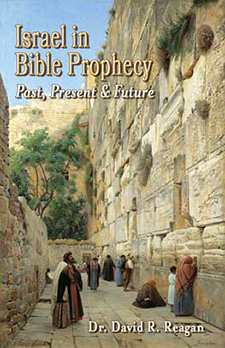 The article above is condensed from Dr. Reagan’s book, Israel in Bible Prophecy.

The book is the product of 40 years of study and 45 trips to Israel. End time Bible prophecy focuses on the Jewish people and God’s determination to bring a great remnant of them to faith in Yeshua (Jesus) as their Messiah. There is simply no way to understand what is going on in the Middle East today without any knowledge of the biblical prophecies concerning the nation of Israel.

The book runs 250 pages in length. It sells for $20, including the cost of shipping. You can place your order through our website, or you can call our office at 972-736-3567, Monday thru Friday between 8am and 5pm Central time.